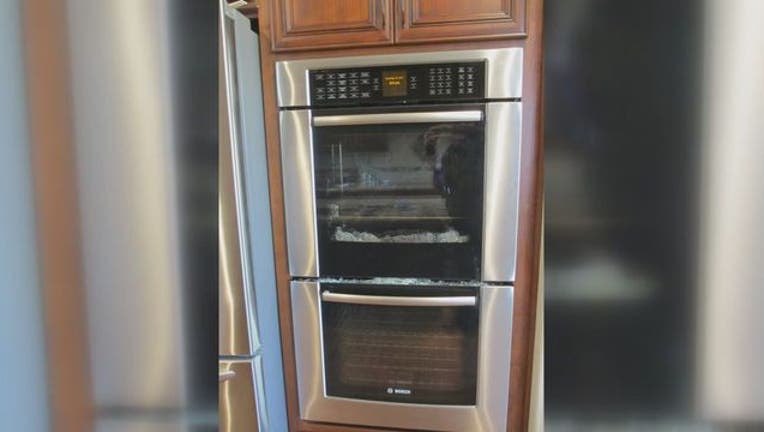 An everyday task turned dangerous this week for a Pinellas County mother, when her oven's glass door exploded, sending shards of glass all over her house.

Jody Madden said she was cooking dinner Monday, had her oven set at 400 degrees and had just turned it up to broil.

Pieces of glass flew across her kitchen, into some of the surrounding rooms and onto her.

"I had it all over my face, I had it on my arms," Madden said, adding she feels fortunate she wasn't hurt and  that her one-year-old wasn't nearby. "I think, personally, he would have been seriously injured."

Madden said her Kenmore oven is about eight years old and, until now, has not been a problem. The incident left her wondering how this could happen.

"My personal opinion is it got too hot and it just exploded. I'm not sure why," she said. "I've used this oven  multiple times. I have no idea why this time it decided to do it but it did."

Madden was also shocked to find out she's far from alone.

According to saferproducts.gov, a website set up by the Comsumer Product Safety Commission to allow customers to  file reports about product problems, about 150 consumers have reported their oven glass doors have exploded.

"In digging through these reports, the one thing that seemed to be common was high heat," he said. "I don't mean just regular baking. I mean people either using the broiler or the high heat self-cleaning cycle."

Chmura wonders whether the government might eventually take action.

"It looks like it's the same story over and over and over again. That tells me this could be the leading edge of  a recall," he said, adding the age of a product should not preclude it from a recall. "The federal government  doesn't care how old the product is. If they discover 10, 15 years down the road that it's defective, it still  can be recalled when there's a safety problem."

"Breakage beyond the first year following purchase is most likely due to damage caused to the glass during use. Damage to the glass can be caused by a number of things including using the door to push in an oven rack or an object striking the glass - both examples may cause a weakness and lead to failure over time."

Costello added the company also uses safety glass that is designed to "pebble" into small pieces to "help prevent  injury if the glass breaks."

Madden hopes other homeowers take her situation as a warning.

"I think people need to know about the dangers moreso than anything else," she said.

Madden added she feels Sears should at least replace her oven. Costello's statement did not indicate any plans to  do so.