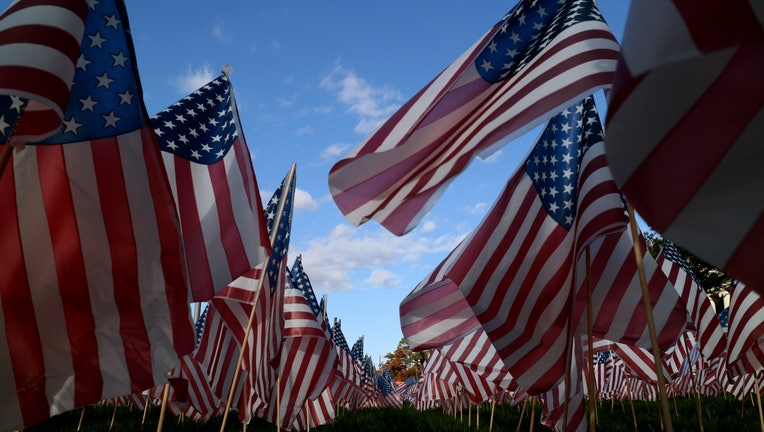 FILE: Thousands of US flags decorate the front lawn of the Fort Lee High School in advance of election day and Veterans Day next week on November 6, 2016 in Fort Lee, NJ. (Photo by Gary Hershorn/Getty Images)

GRAND BAY, Ala. - A thief in Alabama expressed remorse after desecrating an Independence Day tribute to military heroes on church property.

The culprit left a note after returning several of the 100 American flags that had names of veterans on them on the grounds of the First Baptist Church in Grand Bay.

"I'm sorry for taking the flags," the person wrote on a note with the returned flags. "I did not mean any disrespect ... I was drinking and had a dumb idea ... I had no idea that there were names of fallen heroes."

Melba Schafer, a First Baptist Church member, was planning on replacing the flags when her husband discovered them along with the handwritten note propped up against a tree beside the church.

Instead of pressing charges, the church and its members have accepted the apology and extended an invitation to church on Sunday.

"The note was very sincere. You can tell whoever took them was very, very upset with themselves," Pastor Royce Dubose told WPMI.

Many online expressed gratitude that the person was remorseful and returned the flags.

The incident took place as protests following the death of George Floyd have led to statues and symbols, from Confederates to former U.S. presidents and abolitionists, being torn down or desecrated in cities across the nation.