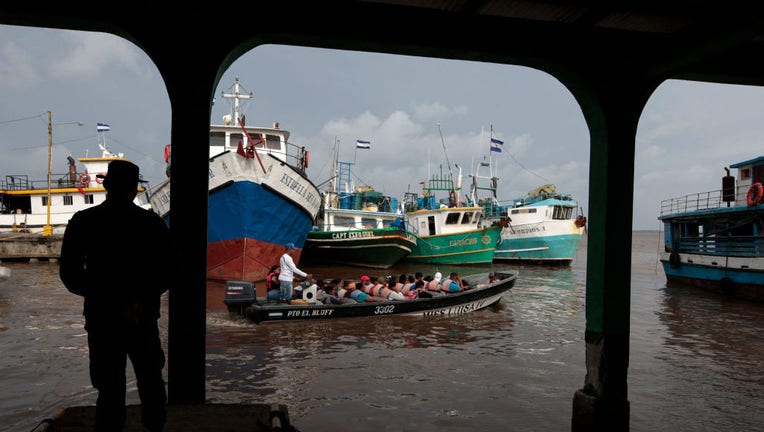 Residents are seen on a boat before the arrival of Tropical Storm Bonnie in Bluefields, Nicaragua, on June 30, 2022. (Photo by Oswaldo Rivas / AFP via Getty)

Tropical Storm Bonnie hit Central America Saturday and rolled back into the Pacific, where it will likely become a hurricane by Tuesday. Tropical Storm Colin formed unexpectedly off the South Carolina coast Friday night, bringing wind and rain to the Carolina coasts. 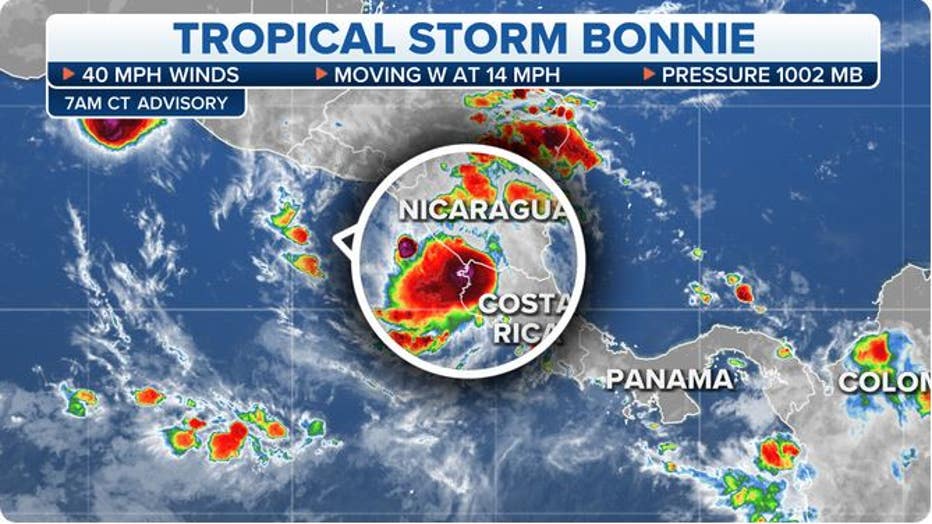 Bonnie is forecast to track to the north offshore of Central America and Mexico, but not far from the coast. (FOX Weather)

Tropical Storm Bonnie caused flooding, downed trees and forced thousands of people to evacuate in Nicaragua and Costa Rica. There were no immediate reports of deaths.

Forecasters said Bonnie is likely to become a hurricane this week off the southern coast of Mexico. Because it's still close to land, the storm will continue to bring heavy rain and tropical storm conditions to Costa Rica and Nicaragua.

Since Bonnie is maintaining its circulation, it will still be called Bonnie over the Pacific, according to FOX Weather. This is only the second time since the naming rules were changed in 2000 that this has happened – the first being Otto in 2016. Previously all systems that reached the Pacific got new Pacific names.

Most often, systems that cross Central America get ripped apart by tall mountains, but Bonnie and Otto found a relatively narrow piece of land with less elevation. If the circulation stays intact, the new rules say the name is kept. 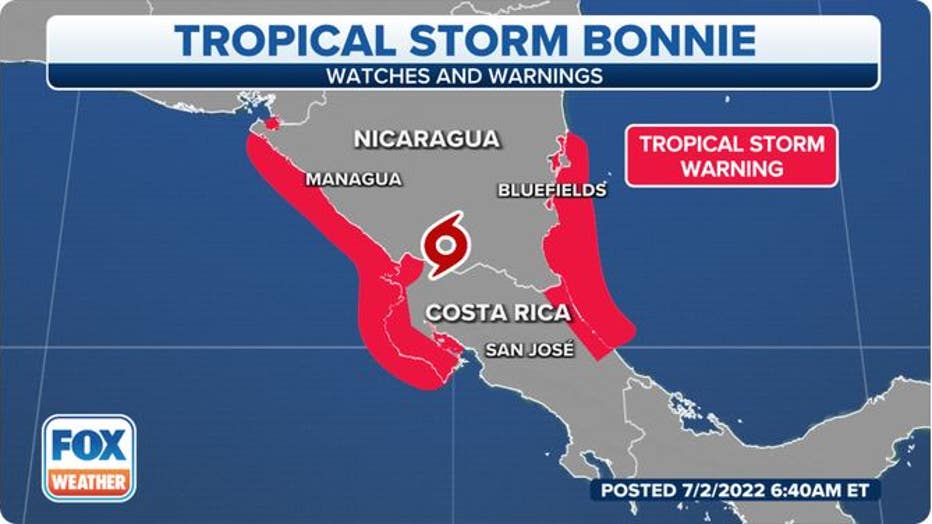 Over Central America, Tropical Storm Bonnie is crossing Nicaragua on its way to the Pacific Ocean. (FOX Weather)

Officials in Costa Rica expressed concern that the storm would unleash landslides and flooding in an area already saturated by days of rain. The government said seven shelters in the northern part of the country already held nearly 700 people displaced by flooding. 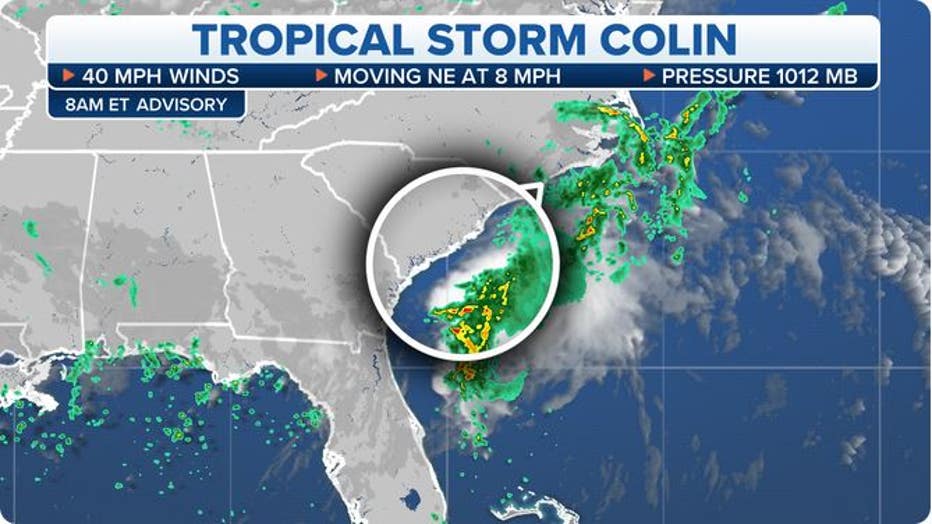 The biggest effect from Colin will be in eastern North Carolina. (FOX Weather)

The remnants of Colin, which was no longer a tropical storm as of Sunday morning, continue to cause life-threatening surf and rip currents along the coast. Those are expected to last through Sunday evening.

In its 5 a.m. Sunday advisory, the National Hurricane Center said the remnants of Colin were located about 10 miles to the north-northeast of New Bern, North Carolina.

The storm system had winds of 30 mph with some higher gusts and was moving off to the northeast at 10 mph.

The 5 a.m. advisory is also the last to be issued by the NHC because the storm system has dissipated, the agency said.

Gusty winds are still expected over the Outer Banks of North Carolina on Sunday morning, and scattered showers and thunderstorms are possible. 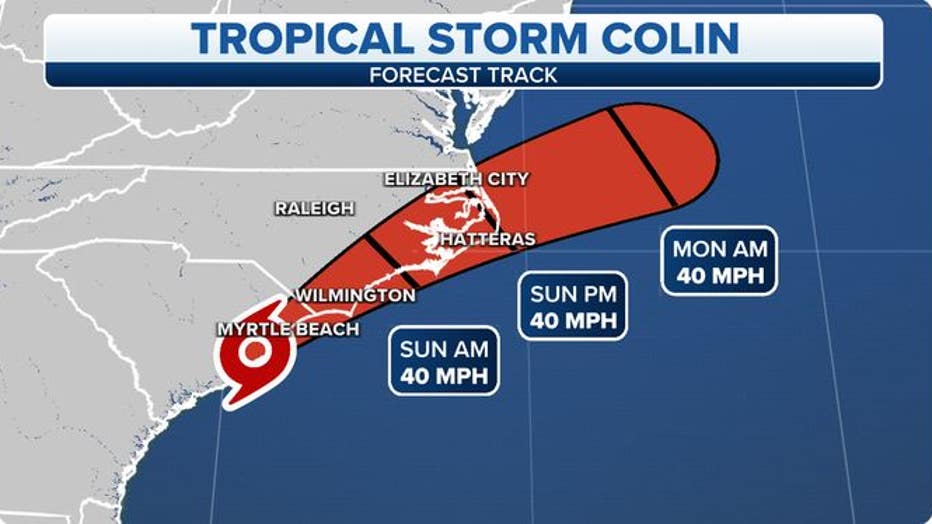 The storm is expected to further weaken and dissipate completely by Sunday night or Monday morning. 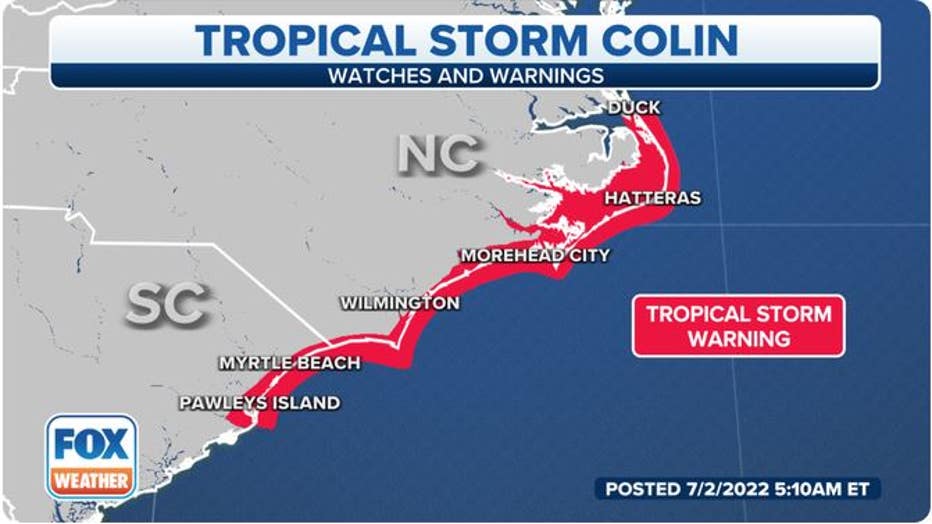 Colin should be past the area tomorrow and is expected to merge with a cold front and die offshore by Monday. (FOX Weather)

Some Fourth of July celebrations planned Saturday in Charleston, South Carolina, were canceled after significant water had pooled on fields and more rain was expected.

Organizers were also forced to cancel a festival planned in Southport, North Carolina.

This story was reported from Detroit. The Associated Press and FOX Weather contributed