WASHINGTON - President Donald Trump on Friday sought to clarify remarks he made about the possibility of people being injected with disinfectant as a possible treatment for the novel coronavirus, claiming he was speaking sarcastically.

“I was asking a question sarcastically to reporters, like you, just to see what would happen,” Trump said on Friday during a bill signing in the Oval Office. 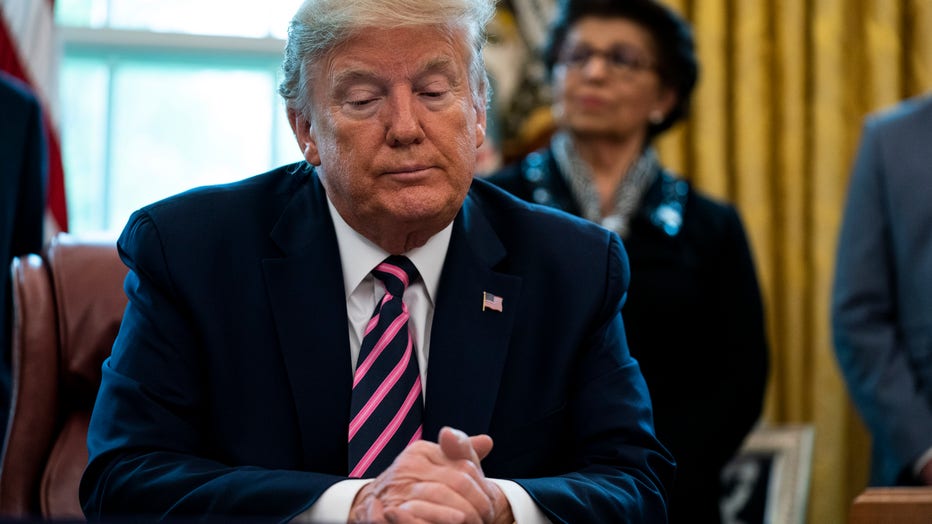 President Donald Trump participates in a signing ceremony for H.R.266, the Paycheck Protection Program and Health Care Enhancement Act, with members of his administration and Republican lawmakers in the Oval Office of the White House in Washington D.

A day earlier, Trump noted on camera during a press briefing that researchers were looking at the effects of disinfectants on the virus and wondered aloud if they could be injected into people, turning to White House Coronavirus Task Force Coordinator Dr. Deborah Birx and asking if it could be investigated.

The White House also pitched “emerging” research on the benefits of sunlight and humidity in diminishing the threat of the coronavirus. Past studies have not found evidence that the warmer temperatures and higher humidity of spring and summer will help tamp down the spread of the virus.

"So, supposing we hit the body with a tremendous — whether it’s ultraviolet or just very powerful light — and I think you said that hasn’t been checked, but you’re going to test it," Trump said on Thursday. "And then I said, supposing you brought the light inside the body, which you can do either through the skin or in some other way, and I think you said you’re going to test that too. Sounds interesting."

Trump continued: “And then I see the disinfectant, where it knocks it out in a minute. And is there a way we can do something like that, by injection inside or almost a cleaning. Because you see it gets in the lungs and it does a tremendous number on the lungs. So it would be interesting to check that. So, that, you’re going to have to use medical doctors with. But it sounds -- it sounds interesting to me.”

During Trump’s comments, Birx was captured on camera staring at the president before inhaling and looking down at the ground. Video footage of the moment went viral on Twitter.

When pressed later by a reporter who asked if his comments about heat and humidity could be considered dangerous, Trump turned to Birx and asked if she'd ever heard of light and heat treatments relative to COVID-19.

"Not as a treatment," Birx responded.

Trump’s comments on disinfectants came after William Bryan, who leads the Science and Technology Directorate at the Department of Homeland Security, spoke at the Thursday briefing about how researchers are testing the effect of disinfectants on virus-laden saliva and respiratory fluids in the laboratory. They kill the virus very quickly, he said.

Trump’s remarks prompted a strong warning from health officials in multiple states and the maker of disinfectants Lysol and Dettol, which said it was issuing a statement to combat “recent speculation.”

“As a global leader in health and hygiene products, we must be clear that under no circumstance should our disinfectant products be administered into the human body (through injection, ingestion or any other route),” said the statement from Reckitt Benckiser.

The federal government also cautioned the nation against the idea.

The Surgeon General’s office tweeted: “A reminder to all Americans- PLEASE always talk to your health provider first before administering any treatment/ medication to yourself or a loved one. Your safety is paramount, and doctors and nurses are have years of training to recommend what’s safe and effective.”

The White House accused the media of taking Trump's comments out of context.

“President Trump has repeatedly said that Americans should consult with medical doctors regarding coronavirus treatment, a point that he emphasized again during yesterday’s briefing,” White House press secretary Kayleigh McEnany said in a statement on Friday. “Leave it to the media to irresponsibly take President Trump out of context and run with negative headlines.”

Trump has acknowledged several times that he's “not a doctor,” but has previously suggested various ideas for fighting COVID-19. He repeatedly touted the malaria drugs hydroxychloroquine and chloroquine, saying they could be a potential “game changer” in the fight against the novel coronavirus.

On Friday, the Food and Drug Administration warned that people should not take either drug to treat COVID-19 outside of a hospital or formal clinical trial, citing reports of “serious heart rhythm problems.”

RELATED: FDA warns against use of hydroxychloroquine for COVID-19 outside of hospitals, clinical trials