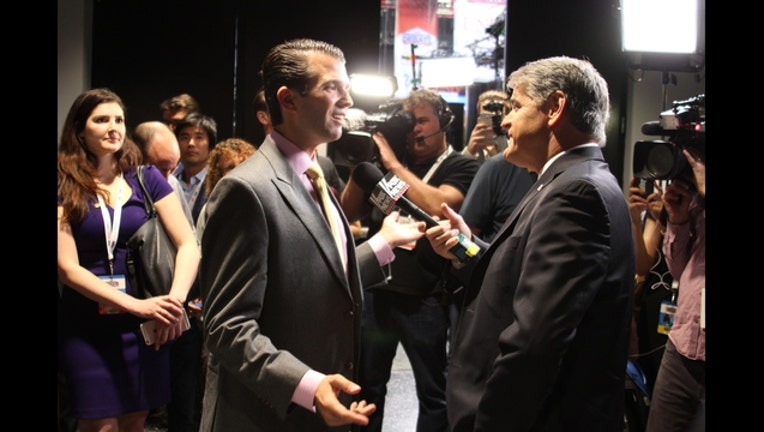 Hillary Clinton and Donald Trump faced off in Las Vegas during the final presidential debate at the University of Nevada, Las Vegas. (Photos: FOX News)

TALLAHASSEE, Fla. (NSF) - The University of Florida has invited Donald Trump Jr. and Kimberly Guilfoyle, his girlfriend and a senior adviser to President Donald Trump’s 2020 re-election campaign, to speak on campus next week.

The Oct.10 event, announced Wednesday by the university’s student-run speakers bureau, will be free for students. It will be funded through student activity fees, which are separate from tuition.

University officials said in a statement they are aware Trump Jr.’s visit may draw a backlash and bring critics of the president and his family to campus but urged showing respect.

“At the same time, the university recognizes the right of members of its community to analytically and respectfully challenge ideas so long as such challenges are conducted in a civil manner that does not stifle the open expression of the opposing ideas,” the statement said.

Pointing to the institution’s “freedom of expression” statement, officials said they are committed to “ensuring that a wide variety of viewpoints are heard on campus as well as to protecting the First Amendment rights of all those in attendance.”

Republican Gov. Ron DeSantis has touted free speech resolutions on campuses as “imperative for the future of our society.” In April, the governor called on all state universities and colleges to adopt such resolutions to show that Florida welcomes “debate and the exchange of ideas.”

The University of Florida regularly hosts famous speakers, such as an April appearance by comedian Hasan Minhaj. Some events have been controversial, such as 2017 appearance by white nationalist Richard Spencer, whose speech was mostly drowned out by a protesters’ chants.

Trump Jr. will appear on campus as his father faces an impeachment inquiry in Washington, D.C. Guilfoyle is a former co-host of the Fox News show “The Five.”