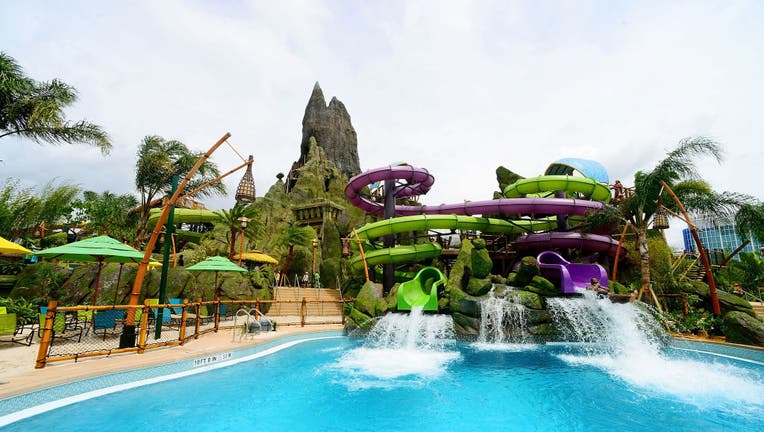 General view of the new Volcano Bay Water Theme Park at Universal Orlando Resort during a day before of its Grand Opening on May 24, 2017 in Orlando, Florida. (Photo by Gerardo Mora/Getty Images)

Universal Orlando reached a settlement with a New York-based tourist who broke his neck on a slide at the Volcano Bay water park in 2019, according to a report Wednesday.

Court records show the lawsuit was resolved in November, the Orlando Sentinel reported. The terms of the settlement were not disclosed in the court documents.

The man, James Bowen, sued in Orange County court in October 2019, months after he was injured on a slide called “Punga Racers.” The lawsuit alleged Bowen’s family vacation “ended in tragedy” after unsafe conditions on the slide “caused his neck to violently snap back.”

Representatives for Universal Orlando did not immediately return a request for comment on the settlement.

Bowen’s lawsuit said the incident left him paralyzed from the neck down. A subsequent review of past incidents at Punga Racers uncovered injuries to at least 115 park visitors over a 13-month period.

The ride, which opened in 2017, has riders slide headfirst into a pool. Bowen’s attorney argued Universal Orlando officials were aware of safety issues related to the slide but allowed it to operate without a fix.

Attorneys for the theme park said officials sought to correct issues with the slide. “Punga Racers” was eventually altered so that riders would go down feet first.

The Orange County judge presiding over the case ruled in September that Bowen would be entitled to punitive damages if Universal Orlando’s operations at the slide were found to be “beyond ordinary negligence and quite possibly gross negligence.”

Bowen underwent surgery and a lengthy rehab process to regain the ability to walk, but has yet to make a full recovery, according to the report.