New lifesaving tool did just that for Venice man

VENICE, Fla. - On May 1, Ned Thompson's life took an unexpected turn, but he's thankful he's alive to tell the tale.

"I took my grandson to baseball, I drove to Home Depot and I drove over and picked up my friend, Robbie, who thankfully went to work with me that day," Thompson recalled.

Thompson and Robbie headed to a painting job in Venice.

"We worked a little bit and that’s all that I remember," said Thompson.

He suffered a massive heart attack at the job site. Police and EMS crews with Venice Fire Rescue rushed to his aid.

"It's the most serious call we can run," said paramedic Juan Leyva.

"Everyone is working as fast as they can," added Donnie Morrell.

Leyva, Morrell, and Tyler Eaton were the paramedics sent on the call.

"We work our entire careers to be able to bring somebody and deliver them back to their families," said Morrell. 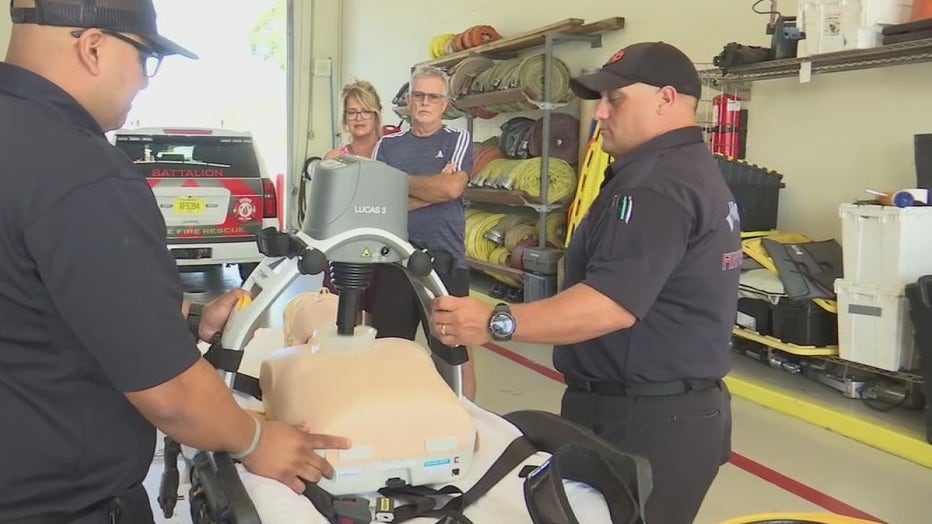 As they worked to resuscitate Thompson, they used a Lucas Device. It helps perform near-perfect chest compressions.

"It's a game-changer, 100%, to be able to deliver CPR that's efficient. There’s nothing else better," said Leyva.

Venice Fire Rescue is the only ground crew in Sarasota and Charlotte counties to have the device. It allows crews to transport and work on other medical needs as it performs compressions.

For about 15 minutes, the device pumped Thompson's chest.

"It's working about a 99% efficiency and it frees up one or two people to work on other aspects of the cardiac arrest," said Eaton.

Venice Fire Rescue has four Lucas devices. They'll add another two to the department at a cost of $17,000 each. Three were purchased through a grant.

The device arches over a patient's chest and a suction cup performs compressions, helping pull the chest up and then push it down, allowing the heart to fill back up with blood to move around the body.

Thompson woke up in the hospital.

"I was sore for about three weeks afterward, it definitely beats you up, but along with them, it saved my life," he said.

Thompson and his wife, Dawn have a new outlook on life and a new group of friends by their side.

"When you come to work every day, your hope is to make a difference, to be able to do that and to have him come back and visit is special," said Tyler.

"They're our family now. We are so thankful," said Dawn Thompson.

"Everybody was there and God, especially. Without God, I wouldn’t be here because everything lined up perfectly," added Ned.