MIAMI - Video taken from the audience during a show at Miami Seaquarium shows a dolphin appearing to attack one of its trainers.

The incident happened Saturday during the Seaquarium's Dolphin Flipper Show, when a trainer could be seen splashing in the pool during a routine -- which apparently wasn't part of the show.

Photographer Shannon Carpenter was in the audience and took video of the incident, which he said happened about 10 to 15 minutes into the show.

"[It] looked like the dolphin rammed into the trainer," Carpenter told WSVN. "There was a struggle, some kind of collision underwater happened. The lady on the paddleboard, she paddled out of the water pretty quick, and then the lead trainer started swimming back towards the dock, and it looked like she got ran into a couple more times."

WATCH: 'Look at this beast!': Gator with missing foot walks under driver's truck in Venice, shakes it from beneath

The trainer then climbed out of the water and stayed on her knees until the show ended.

While children in the audience were still applauding, Carpenter said adults around him could tell something was wrong. 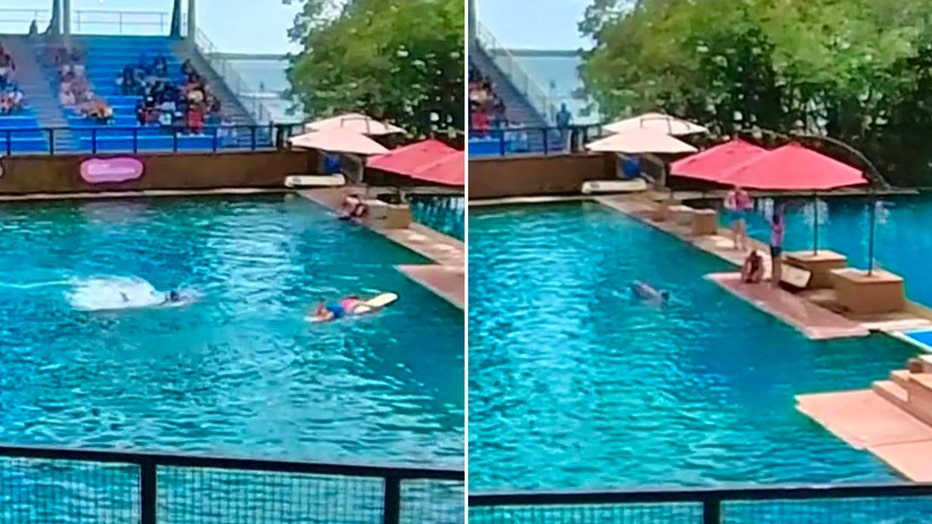 The Seaquarium said what happened during the show was an accident.

"While demonstrating a practiced behavior as part of the Flipper Show on April 9th, a trainer accidentally scratched the dolphin, Sundance, with her hand. This was undoubtedly painful to Sundance, who reacted by breaking away from the routine and swimming towards and striking the trainer," the Miami Seaquarium said in a statement.

According to the Seaquarium, this is the first time the trainer and the dolphin had a collision. As a result, they are evaluating the procedures for the Flipper Show and other shows at the Seaquarium, saying any adjustments to protocol will minimize the chance for future accidents.

The Dolphin Company, which owns Miami Seaquarium, took over management of the South Florida attraction just four weeks ago.

The company said both Sundance and the trainer are recovering well after the collision.