Virginia officials defending their response to a blizzard that stranded hundreds of motorists along a major interstate highway said conditions for the gridlock were caused by a combination of unusually heavy snowfall, plunging temperatures and a rainy start that kept them from pretreating the roads.

RICHMOND, Va. - Virginia officials defending their response to a blizzard that stranded hundreds of motorists along a major interstate highway said conditions for the gridlock were caused by a combination of unusually heavy snowfall, plunging temperatures and a rainy start that kept them from pretreating the roads.

There were no reported deaths or injuries from the calamity on Interstate 95, one of the nations busiest highways, but plenty of outrage from motorists, some of whom were stranded overnight Monday into Tuesday, posting pleas for help on social media.

"We all need to be clear that this was an incredibly unusual event," Gov. Ralph Northam said at a news conference, adding that he could understand drivers' "frustration and fear."

Problems began Monday morning, when a truck jackknifed on Interstate 95 between Richmond and Washington, triggering a chain reaction as other vehicles lost control, state police said.

RELATED: How are roads pre-treated? A look at winter storm prep after Virginia's I-95 shutdown

They mounted throughout the day as snow fell at a rate of up to 2 inches an hour, said Marcie Parker, a Virginia Department of Transportation engineer leading the effort to clear the interstate.

"That was entirely too much for us to keep up with," she told reporters. "Consequently, with the amount of traffic that we had on the interstate, the trucks and the cars couldn’t make it up and down the hills because we had too much snow and ice out there."

Lanes in both directions eventually became blocked along an approximately 40-mile stretch of I-95 between Richmond and Washington, D.C. As hours passed and night fell, motorists posted messages on social media about running out of fuel, food and water.

Truck driver Emily Slaughter said she was driving from New Jersey to Georgia to deliver vegetables to a FedEx facility and became stranded for five hours on the southbound side of I-95. She said everything on the road was fine until she hit Virginia.

"All of a sudden you could no longer see lines. It got a little scary there," she said.

RELATED: I-95 reopens in Virginia after drivers stranded for 18+ hours following snowstorm

Meera Rao and her husband, Raghavendra, were driving home after visiting their daughter in North Carolina when they got stuck Monday evening. They were only 100 feet past an exit but could not move for roughly 16 hours.

"Not one police (officer) came in the 16 hours we were stuck," she said. "No one came. It was just shocking. Being in the most advanced country in the world, no one knew how to even clear one lane for all of us to get out of that mess?"

Northam defended his decision not to activate the Virginia National Guard or declare a state of emergency. 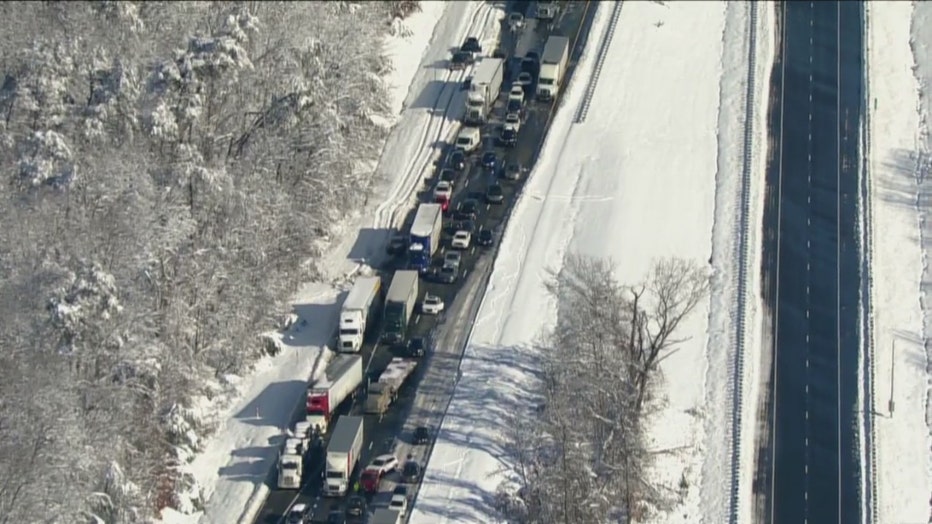 Dozens of vehicles are seen stranded along I-95 in Virginia Tuesday after an accident and bad weather shut down both sides of the interstate.

He said the issue facing state crews was not a lack of manpower but the difficulty of getting workers and equipment through the snow and ice to where they needed to be. And he said a state of emergency, which would typically be declared hours or days before an event to create extra flexibility in responding, would have done no good.

Up to 11 inches of snow fell in the area during Monday’s blizzard, according to the National Weather Service, and state police had warned people to avoid driving unless absolutely necessary, especially as colder nighttime temperatures set in.

The National Weather Service’s Washington-area office noted in a forecast discussion Sunday that snow could fall at a rate of as much 3 inches per hour and total accumulation of as much as 12 inches in the area.

RELATED: Stranded drivers walk dogs, run out of food and water during I-95 shutdown in Virginia

Two independent forecasting experts offered differing opinions on how much the intensity of the snowfall cited by state transportation officials could be blamed for the traffic pileup.

Judah Cohen, a winter storm expert for Atmospheric Environmental Research, a commercial firm outside of Boston, said other areas respond to even more intense accumulations without traffic disasters.

"I know of snowfall rates of 5 to 6 inches per hour and without the traffic nightmare we just saw," he said in an email, adding: "I do think a few more inches fell than predicted in total but not enough to overwhelm the system."

Northern Illinois University meteorology professor Victor Gensini, however, said in an email that when snow falls at more than two inches per hour, "it is pretty difficult for most locations to keep up, especially if they lack infrastructure."

Because the storm began with rain, crews could not pretreat the roads because the salt or chemicals would have washed away, officials said. Some traffic cameras were also knocked out by power outages. And Parker said the interstate’s express lanes were not of much use to clear the logjams, given the location of the traffic backups.

Crews worked throughout the day to clear the roadway, and traffic spilled out onto secondary roads, causing additional delays.

It took until around 8:30 p.m. Tuesday for the Virginia Department of Transportation to announce it had reopened the interstate after its crews ensured all stranded motorists made it off the highway and then cleared abandoned vehicles and plowed the stretch.

Officials never provided an estimate of the number of vehicles that tied up in the jam. Photos showed they numbered in the hundreds, if not thousands.

Kelly Hannon, a spokeswoman for the transportation department, apologized to motorists for the I-95 logjam and said the department would take an "exhaustive look" at the incident.

The storm also left passengers on an Amtrak train stranded in Virginia. Amtrak’s Crescent left New Orleans on Sunday on its way to New York and got stuck near Lynchburg on Monday morning, when downed trees blocked the tracks.