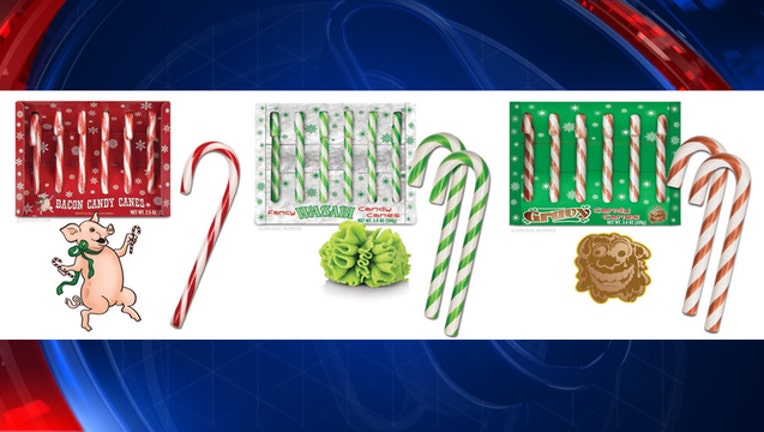 NEW YORK (FOX 13) - Wasabi, pickle and gravy might not be the first flavors that come to mind when thinking about candy canes. But, the classic red and white holiday treat has gotten a major overhaul this year.

Economy Candy in New York City is one of the oldest traditional candy shops, having been in business for 79 years.

"Traditional candy canes: You've got to have them. They go on the tree, you hand them out to family and friends and they're cheap. A box of 12 is $1.29," said Mitchell Cohen, co-owner of Economy Candy.

But, some of the treats on their shelves this year are anything but traditional.

"You know, believe it or not, bacon candy canes are the new fad thing," Cohen said.

The candy store owner calls the meat-flavored candy a "great gag for Christmas." Someone expecting that sweet, minty taste will be surprised with bacon instead.

But it's not just bacon flavored candy canes-- a quick search online brings up plenty of options. Pickle, wasabi, coffee, and even gravy flavors are being sold.

There's even a no flavor, no stripes, no spirit "Ba-Humbug" cane.

What's crazier than the flavors might be that people actually buy them. Economy Candy sold out of their bacon-flavored canes last year. This year, they've ordered more of the meat-flavored candy sticks.

The interesting new flavors certainly put a twist on a traditional treat.