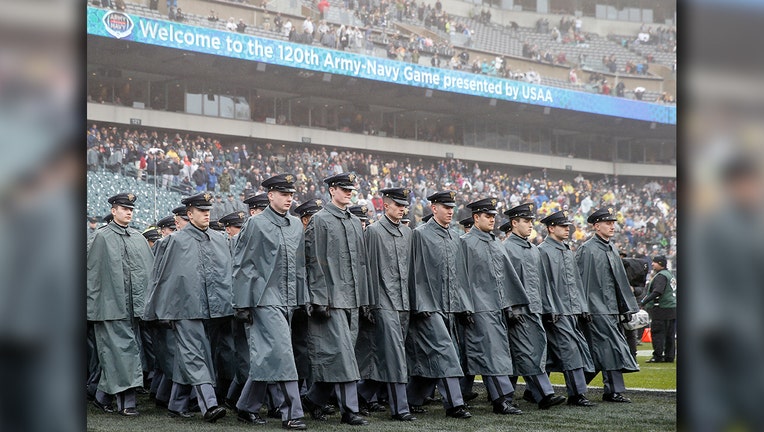 The Army Core of Cadets march on the field before the game between the Army Black Knights and the Navy Midshipmen at Lincoln Financial Field on December 14, 2019 in Philadelphia, Pennsylvania. (Photo by Elsa/Getty Images)

PHILADELPHIA - West Point and Annapolis officials are trying to determine the motives of service-academy students who flashed hand signs on national television Saturday that in certain contexts are associated with “white power.”

The hand sign appeared to be displayed both by West Point cadets and Annapolis midshipmen during a broadcast of the annual Army-Navy football game in Philadelphia, but U.S. Military Academy officials haven’t yet determined their intent, according to a West Point spokesman.

Annapolis officials appointed a preliminary inquiry officer to conduct an internal investigation, Annapolis spokeswoman Cdr. Alana Garas said Sunday. “Based on findings of the investigation, those involved will be held appropriately accountable,” she said.

In a statement Sunday, the Pentagon didn’t comment on the hand signs but said its regulations “mandate that military personnel reject active participation in organizations that advocate supremacist, extremist, or criminal gang doctrine.’’

“We’re looking into it,” said Lt. Col. Chris Ophardt, a West Point spokesman, soon after the sign appeared on national television Saturday afternoon. “I don’t know what their intention is.”