After making landfall this week in Nicaragua as a Category 4 hurricane, Eta has become very disorganized and slow-moving, remaining over Honduras on Thursday. But it will likely restrengthen when it reenters the Caribbean.

The confidence levels for Tropical Depression Eta's forecast remain low. Floridians may get a better idea by Friday, explained FOX 13's meteorologist Dave Osterberg, after it moves away from Central America.

"Nothing will really be set in stone, to be honest, until that low moves back out over the water tomorrow," Osterberg said. "Then, you'll get a real good gauge as to where it's going to go from there." 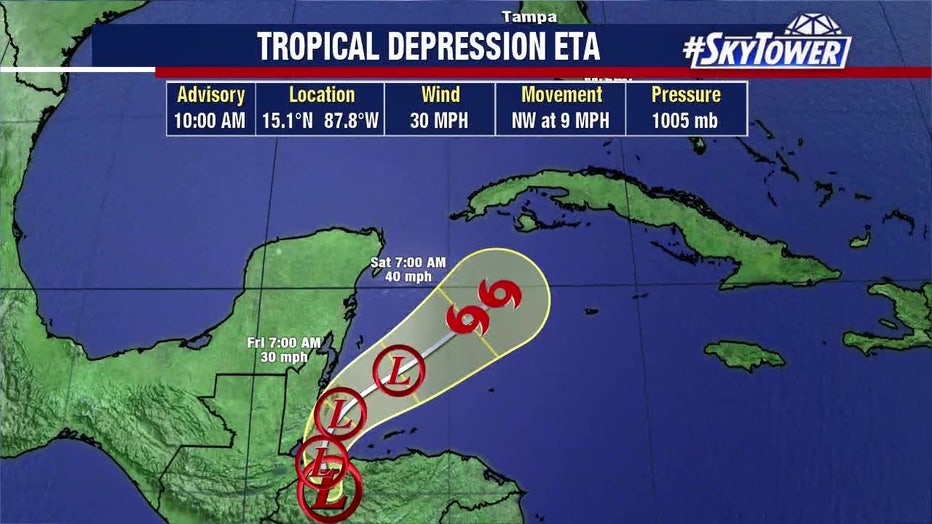 He said if Eta follows the current track, South Florida will see lots of rain, but forecasters don't expect it to be a major hurricane as it nears the Sunshine State.

"Not as much for central Florida," Osterberg said, "but as far as wind speeds go, keeping it as a tropical storm will obviously be a big victory for South Florida as well." 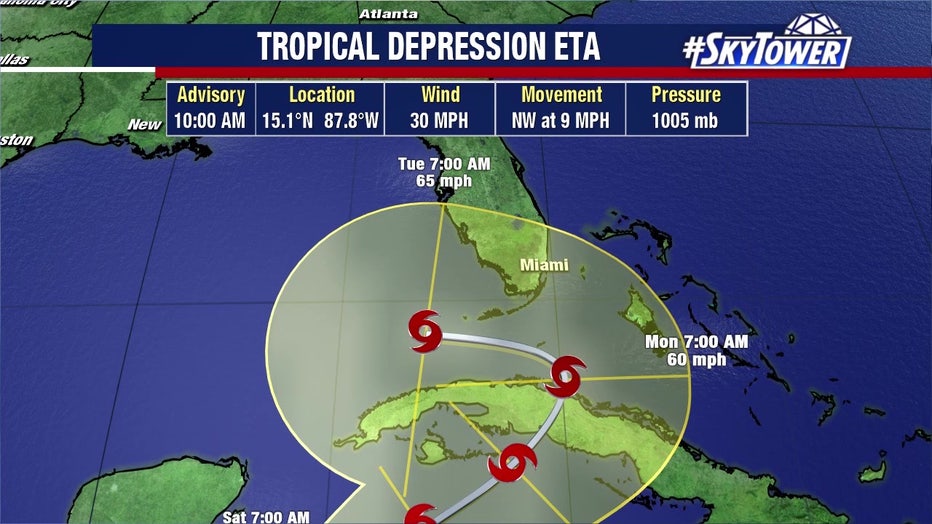 By Monday, it could be sitting on the Florida Keys.

"I know that's far enough away not to bring big winds to us, but it will put us in a wind flow which will bring us some showers," Osterberg said. "Now on one hand, we could definitely use a little bit of rain, we just need to keep that, whatever that is, far enough away where we're not getting too much of it."

Osterberg described Eta as a "pinball," saying there are other factors influencing the current computer models.

"That little low is like a pinball sitting out there and there are so many different factors playing in as far as where it's going to go," Osterberg said. "You got high pressure off to the east, you got a trough coming in from the west and they're going to be fighting it back and forth and that's why you're seeing this back and forth with the computer models." 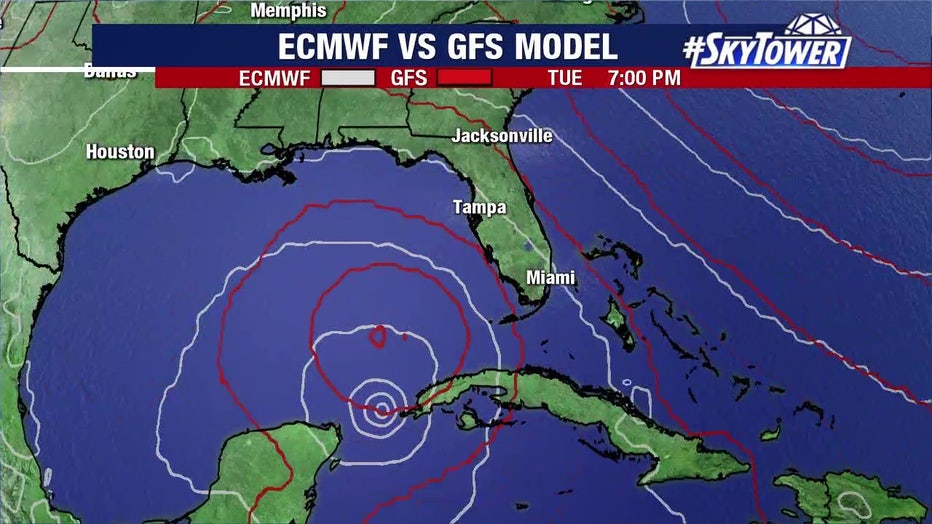 With that said, Tampa Bay's forecast could change by tomorrow. At the very minimum, there will probably be some shower activity early next week.

"[The 7-day forecast], the Monday-Tuesday timeframe, it's going to change," Osterberg said. "We just have to base on what we see now, give you that forecast." 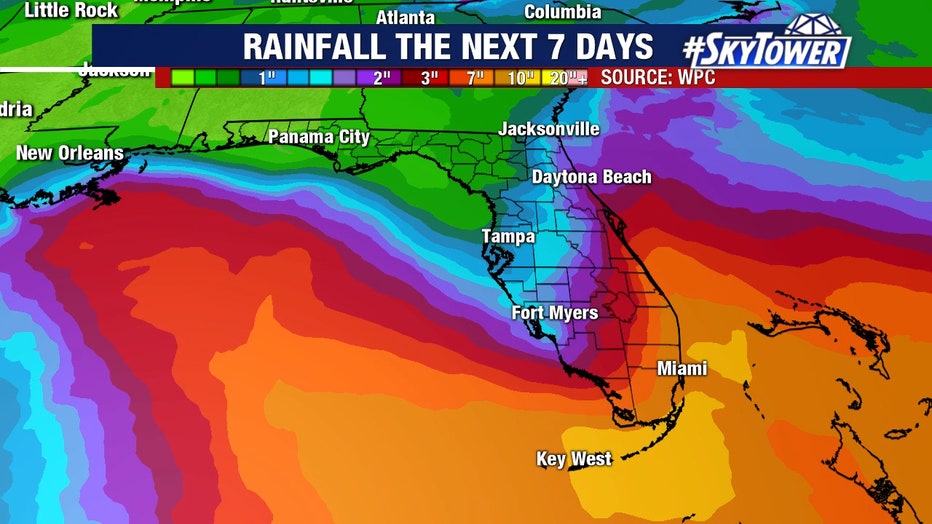 Eta moved into Honduras on Wednesday as a weakened tropical depression but still bringing the heavy rains that have drenched and caused deadly landslides in the country’s east and in northern Nicaragua.

The storm no longer carried the winds of the Category 4 hurricane that battered Nicaragua’s coast Tuesday, but it was moving so slowly and dumping so much rain that much of Central America was on high alert. 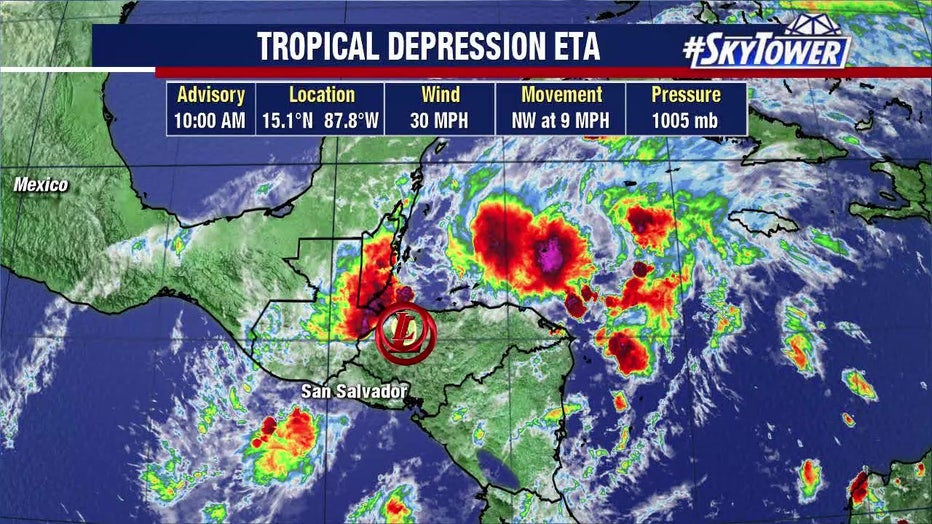 The long-term forecast shows Eta taking a turn over Central America and then reforming as a tropical storm in the Caribbean — possibly reaching Cuba on Sunday and southern Florida on Monday.