An animal advocate was badly burned while she was trying to save rescue cats from a house fire.

LARGO, Fla. - More than a dozen cats were rescued thanks to the efforts of a prominent Pinellas County pet rescuer, but she had to be hospitalized after suffering burns and smoke inhalation during the early morning fire Saturday.

Laura Kile woke up to the sounds of smoke alarms blaring and foster cats screaming inside her home.

While the fire spread, Kile rushed to save as many animals as she could, sacrificing her own safety to give dozens of cats and kittens a chance to escape.

"She was going to keep going back until she dropped dead," said neighbor Debbie Miller.

Kile broke windows and opened cages, frantically tossing cats out of the burning home and continuing to go back in for more until firefighters forced her to stop. 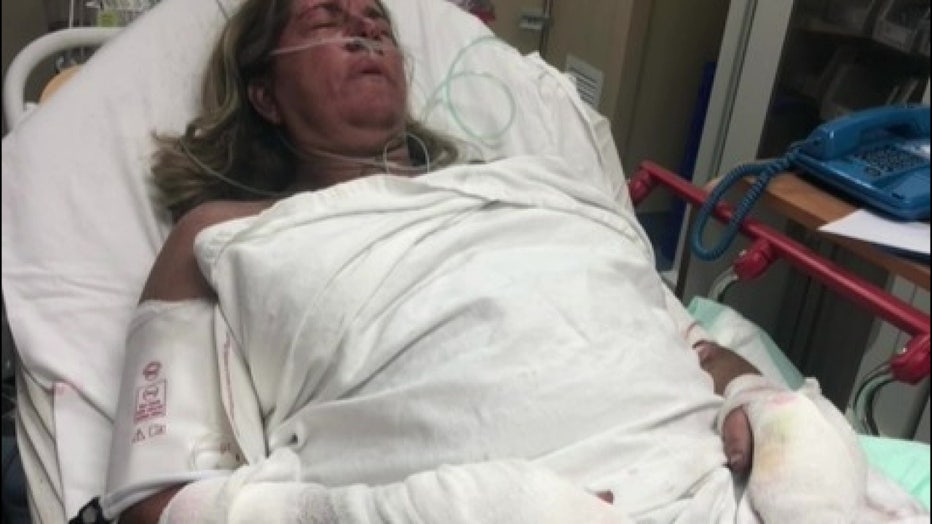 Nextdoor neighbors Debbie and Ryan Miller say they awoke to sirens and lights from emergency vehicles. When they came out of their home, Kile had already been loaded onto a stretcher.

Debbie says Kile attempted to yell out to them, but her vocal cords had been badly damaged by the smoke. Still, she was able to get her message to them: help find the cats. 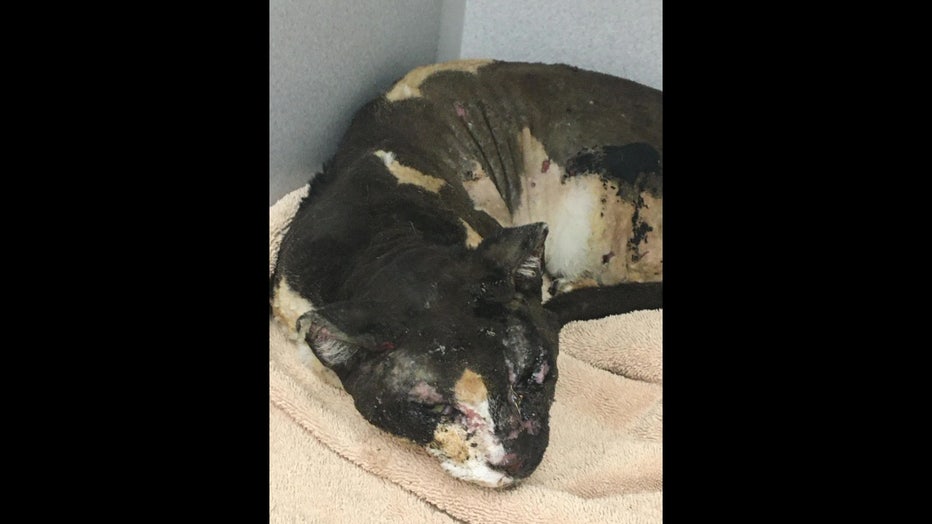 "She was on the gurney. I go over and she's trying to yell but because of the smoke inhalation she couldn't speak very loudly," said Ryan. "She’s just saying over and over again: Get my babies. Get my babies. She was going to die for those cats."

Kile is known in the Bay Area for her work fostering and rescuing cats. She’s helped find homes for thousands of cats and kittens and spends her weekends running adoption events across St. Petersburg. 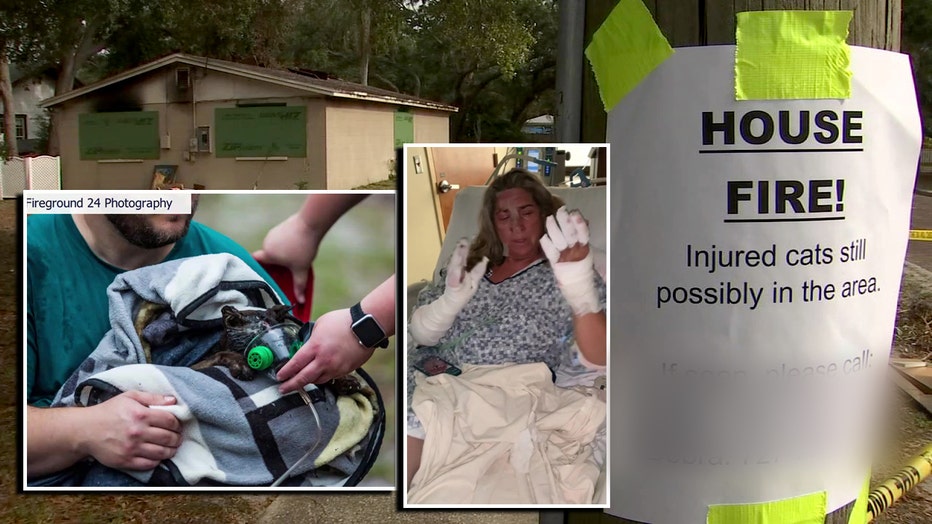 When her home caught on fire Saturday morning, her kennels were especially full.

Kile’s bloody palm print could still be seen next to a window of the burned-out home, a testament to her dedication and love for the cats she fostered.

Kile managed to free dozens of cats before she was rushed to Tampa General Hospital’s burn unit.

The Millers and several local rescuers were called in to help and scrambled to round up the freed cats. 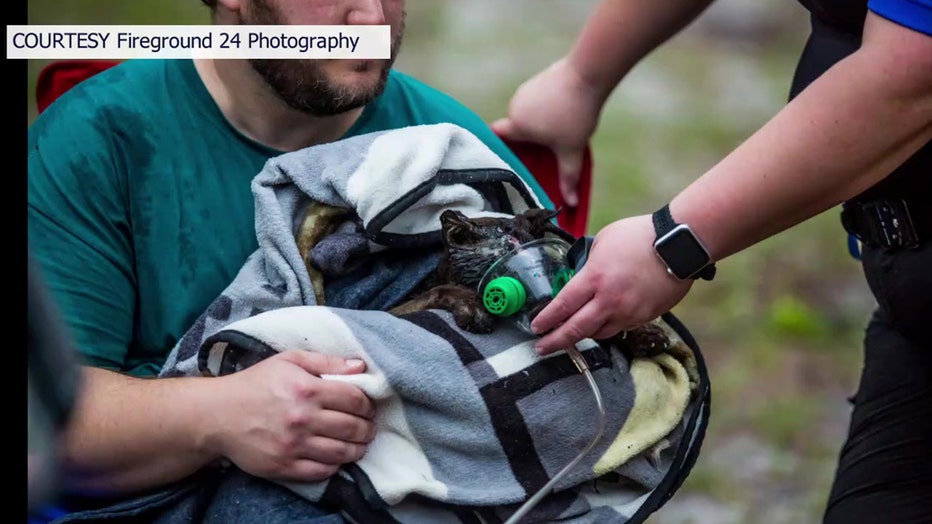 EMTs brought out cat-sized oxygen masks and helped instruct neighbors in administering the oxygen to kitties struggling to breathe.

"Oxygen bottles were coming out from everywhere. They got as many people as they could, firefighters and EMTs, even the EMT chief, the captain was giving oxygen to cats and bringing them over," recalled Ryan. "They were having trouble breathing, and you just get the oxygen mask near them, and they could essentially feel that oxygen going into the lungs, and they automatically knew they had to do that to survive. So they would just find that source and just stick their nose right in there. Their whole body would completely relax because they weren't having to struggle to breathe anymore." 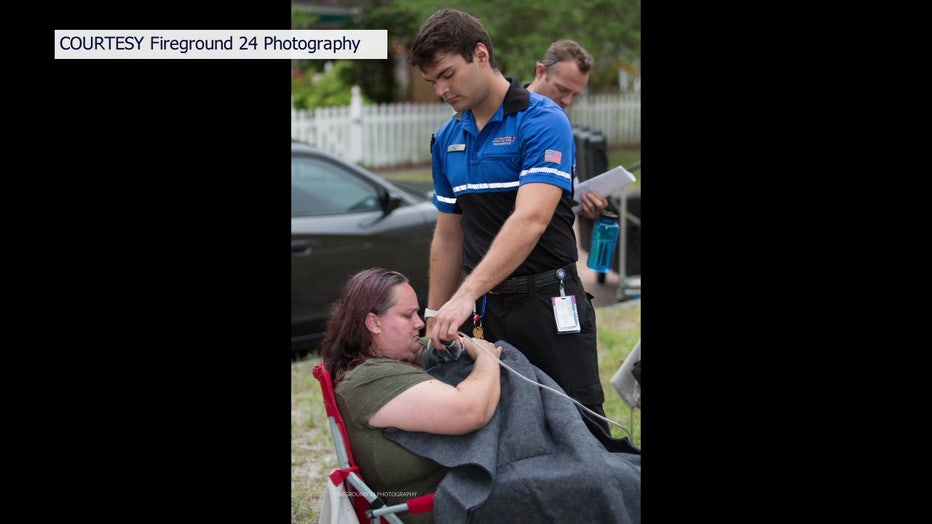 At least 16 cats survived. The most severe cases are still being treated for extensive burns at emergency vet centers.  Others are receiving special care in a medical foster home. Of her four personal cats, only one is believed to have survived.

Local cat trapping groups are helping to look for any other survivors that may still be hiding out in her neighborhood.

Friends and rescue groups from across the country have shared her story to help rally behind Laura and the rescued cats. Donations and well wishes poured in over the weekend. As of Sunday evening, a GoFundMe campaign for Laura and the surviving cats had surpassed $60,000. 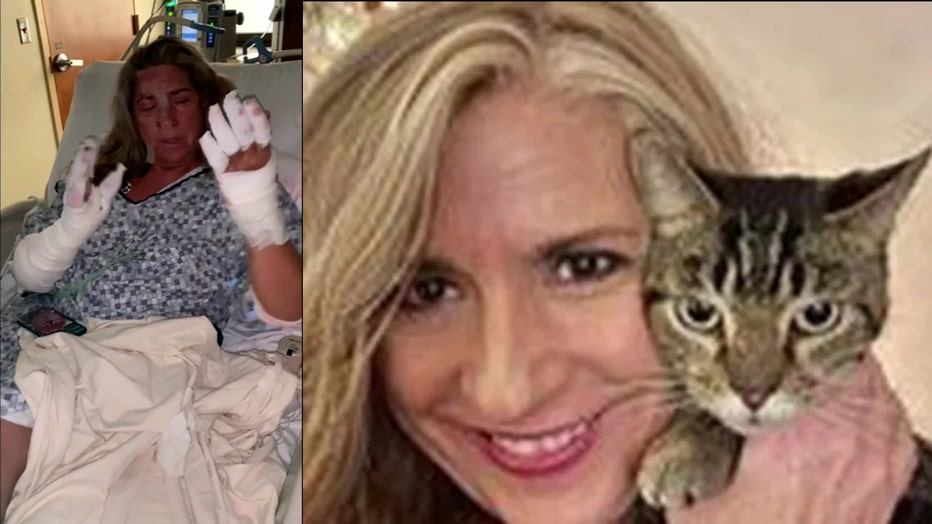 Cohen says Kile is in a lot of pain, both physically and mentally knowing that so many cats and kittens did not survive. The kind messages have been a source of relief during her recovery.

From the ICU burn unit on Sunday, Kile recorded a message thanking supporters for their kind words and assistance.

"Thank you so much for helping and for prayers. I'm really struggling here," Kile said, her hands and face covered in bandages and voice scratchy from smoke inhalation. "Thanks for rallying around and supporting. I don't know when I'm getting out. Hopefully in the next day or two. They're assessing some lung damage. They're getting ready to change my bandages but I appreciate you all so much. Keep the prayers coming."

The surviving foster cats will likely need several weeks to recover before they’re available again for adoption. For those interested in adoption or to find out how to help, reach out to Pet Rescue of Florida. https://www.facebook.com/rescuepetsofflorida