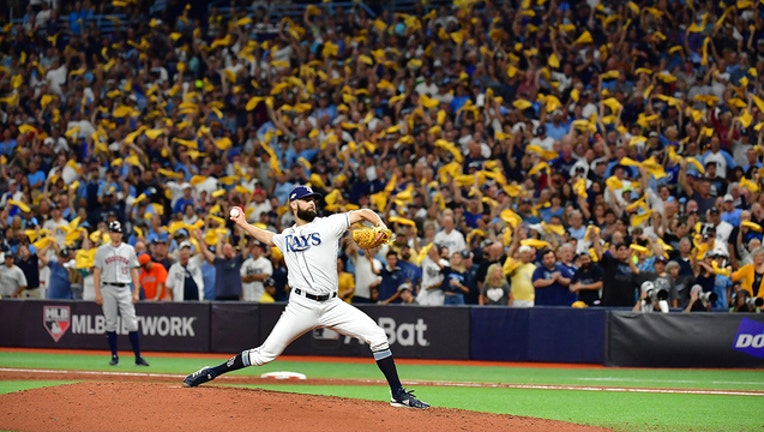 Nick Anderson #70 of the Tampa Bay Rays delivers the pitch against the Houston Astros during the sixth inning in game four of the American League Division Series at Tropicana Field on October 08, 2019. (Photo by Julio Aguilar/Getty Images)

HOUSTON, Texas - Houston will host Tampa Bay in the final game of the ALDS Thursday.

The Astros are 60-21 on their home turf. Houston has slugged .495, good for first in the majors. Alex Bregman leads the team with a .592 slugging percentage, including 80 extra-base hits and 41 home runs.

Bregman leads the Astros with 41 home runs and has 112 RBIs. George Springer is 8-for-29 with a double, four home runs and six RBIs over the last 10 games for Houston.

Austin Meadows leads the Rays with 33 home runs home runs and is slugging .558. Tommy Pham has 10 hits and is batting .263 over the last 10 games for Tampa Bay.

Tyler Glasnow starts for the Rays after taking a 6-2 loss in the opener, when he gave up two runs and four hits in 4 1/3 innings, including José Altuve's go-ahead, two-run homer in the fifth.

Both starters came up with the Pirates organization and were teammates in Pittsburgh from 2016-17.

Cole was the top pick in the 2011 amateur draft and was traded to Houston in January 2018 for right-handers Michael Feliz and Joe Musgrove, outfielder Jason Martin and infielder Colin Moran.

Glasnow was a fifth-round selection in that same draft, and was dealt to the Rays on July 31 last year along with outfielder Austin Meadows and a player to be named (right-hander Shane Baz) for right-hander Chris Archer, who went 3-9 for Pittsburgh this year.

First pitch will be at 7:07 p.m. Thursday. Tampa Bay fans have three official watch parties where they can view Game 5. Two will take place in St. Petersburg: one will be Baseball in the Park, located at Straub Park, while the other will be at Park & Rec and The Avenue, located on 4th Street South.

Tampa residents can cheer on the Rays at Sparkman Wharf.