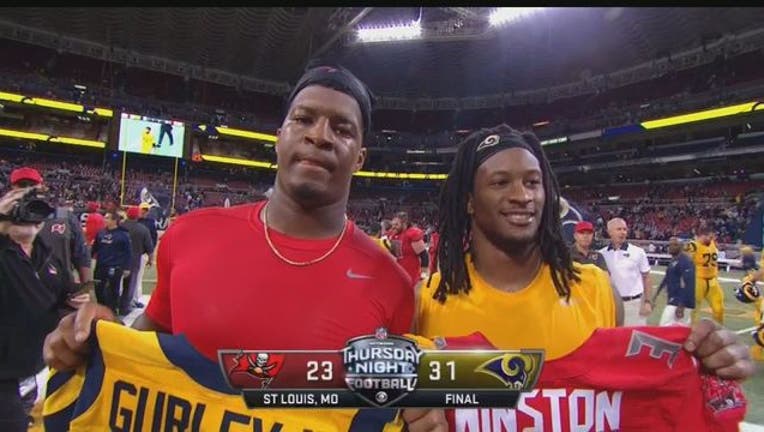 ST. LOUIS (AP) — Rams players saw the signs, heard the chanting, noticed the volume was turned up. The effort was inspired on what could have been the final home game for the franchise in St. Louis.

"It was just great for them to come out and show the support tonight and it was a beautiful thing," defensive end William Hayes said. "We haven't been putting the best product on the field the whole year."

Fans chanted "Keep Our Rams! Keep Our Rams!" and carried signs, one of them reading "We Don't Need Kroenke, We Just Want our Rams."

Owner Stan Kroenke, who wants to move the Rams (6-8) to Los Angeles, attended the finale but kept a low profile.

The team announced 51,295 tickets had been distributed for the 66,000-capacity dome.

Up 31-13, the Rams became conservative, and Jameis Winston took advantage with two touchdown passes in a big fourth quarter. He had just 125 yards passing the first three quarters, but finished with a career-best 363, his first 300-yard effort, for Tampa Bay (6-8).

"The first half, I didn't play good enough for us to win," Winston said. "We were protecting good enough, I just have to make the throws."

The halftime deficit was the Buccaneers' largest since they were down 35-7 against Tennessee in their opening 42-14 loss. So, Tampa Bay's total output of 509 yards rang hollow.

"Tonight, we didn't see a whole lot to be excited about," coach Lovie Smith said. "Being close just doesn't do it on a night like tonight."

Mike Evans had nine receptions for 157 yards and topped 1,000 yards.

Austin Seferian-Jenkins' 9-yard scoring catch cut the deficit to eight with 1:34 to play, but the Rams' Bryce Hager recovered the onside kick.

Benny Cunningham had a 102-yard kickoff return to the Tampa Bay 3 in the fourth quarter and a 44-yard return on the opening kickoff capped by Austin's 17-yard scoring reception.

Gurley needed 25 yards to become the first Rams rookie to rush for 1,000 yards since Jerome Bettis and didn't get it by much, gaining 48 yards on 21 carries.

Austin is the first player since Gale Sayers in 1965 to score at least four rushing touchdowns, five receiving touchdowns and one touchdown on a punt return in a season. He leads the Rams with 10 total TDs.

Several stars from the 1999 Super Bowl championship team attended the finale, including Orlando Pace, Isaac Bruce and Torry Holt, plus Kurt Warner and Marshall Faulk from the NFL Network. At halftime, Warner took off his sports jacket and tossed a pass to Bruce, who made the catch as he was running along the home team's sideline and jogged into the end zone.

Tailgating was down with the 12th consecutive non-winning season ensured and temperatures in the high 30s, although it didn't stop Shamus McDonough's family, who have set up shop nearby at Laclede's Landing every game since the Rams came to St. Louis in 1995.

"Even through the worst years, we have stayed loyal," McDonough said. "We say the same thing at every tailgate — If you Ram Up hard enough, anything is possible. If this is the last game, we're going out strong."

Kenny Britt's 60-yard catch was the first by a Rams wide receiver since Stedman Bailey against Arizona in Week 4.

The Rams were also playing for Bailey, who is recovering from two gunshot wounds to the head in a Miami-area hospital. Austin and some teammates are planning to visit Bailey during the weekend.

"I represent the '12' every day," Austin said. "A couple of us are going to go visit our brother and show him some love."

NOTES: Winston has 20 TD passes, breaking the franchise rookie mark of 19 by Mike Glennon in 2013. ... The Buccaneers' 98-yard scoring drive for the first of their two fourth-quarter TDs tied the record for longest in franchise history. ... Buccaneers S Chris Conte (left knee) was injured on Austin's second TD in the third quarter when he got tangled up with another defender.