Translators are all stars for the Tampa Bay Rays

ST. PETERSBURG, Fla. - They may not be out on the field during a Tampa Bay Rays game, but Many Navarro and Daniel Park are still living their big league dreams as the team's interpreters.

Navarro has been the Rays Spanish language translator for the last five years, but he offers other skills as well.

"I was found throwing batting practice, so I also do that pre-game and during the game," said Navarro.

In reality, Navarro was asked to throw batting practice for eventual No. 1 overall draft pick Royce Lewis and was admired by the Rays for both his pitching arm and his bilingual skills.

Park, meanwhile, joined the team just this season after graduating from The University of Tampa and interning with the Clearwater Threshers, and their team translator last season.

However, Park got his start as a translator even earlier when he interpreted for U.S. and South Korean troops during joint drills while serving his mandatory military service for South Korea. 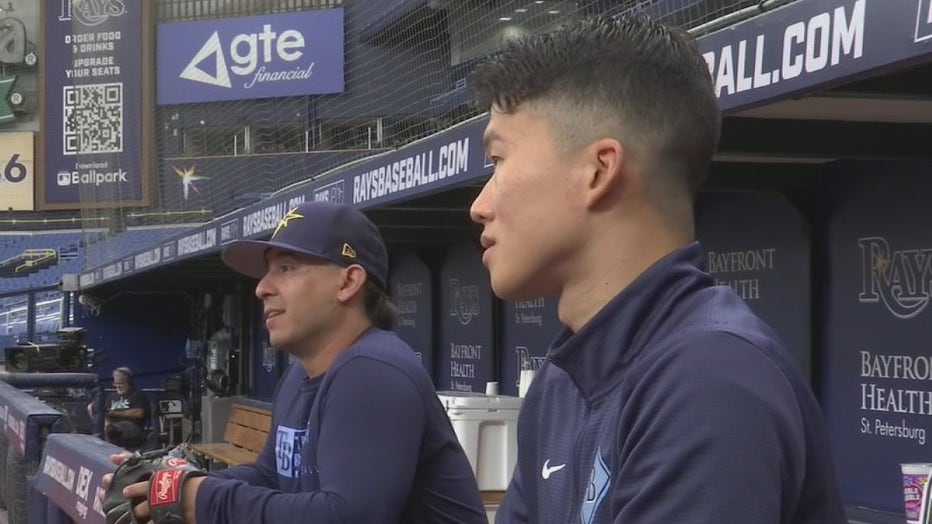 "That's when I first saw it and thought 'Huh, that's a pretty cool job.'" said Park.

Now, you see them both in front of the camera as often as the Rays' star players.

"We have to be just as excited as they are, because we are part of the team," said Navarro.

For Navarro and Park, the job isn't just about translating what a player says, it's about creating a bond and building trust.

"There's always that comfort and trust that they have toward us. My job is to make them comfortable," said Navarro.

That trust is returned as it turns out, according to Rays third baseman Yandy Diaz.

"Manny's here, not just as a friend, but as a part of the family," said Diaz through translator Navarro.

After all, Navarro and Park both agree, you don't need to speak English, Spanish or even Korean to be a fan of this game.

"Baseball is the universal language," said Navarro.  "It doesn't matter what language you speak. Baseball is one language."