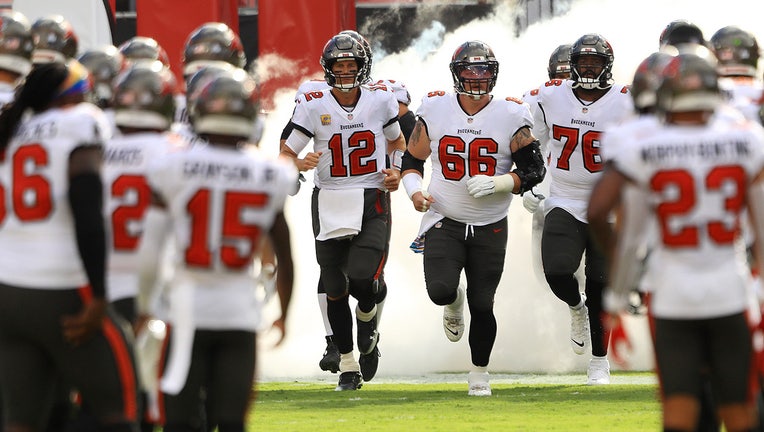 Tom Brady and the offense take the field before the start of a game against the Green Bay Packers at Raymond James Stadium on October 18, 2020 in Tampa, Florida. (Photo by Mike Ehrmann/Getty Images)

For those who accept the premise that the six-time Super Bowl champion quarterback left the Patriots to prove elsewhere that he was the backbone to that dynasty, well, he’s doing precisely that for Tampa Bay.

The Buccaneers have scored 222 points, topping the league, even ahead of the defending champion Chiefs. Tampa is 5-2 and Brady is a huge reason for that mark — for his arm, for his leadership, for his guile.

For all of the traits that have made him the most successful quarterback in the Super Bowl era.

Expecting Brady to offer much insight into his performances, particularly in the midst of a season, is like, well, expecting the same from Belichick. Ask the 43-year-old quarterback about what he did, and you get:

Tom Brady threw four touchdown passes to move past Drew Brees for the most in NFL history and ran for another to lead the Tampa Bay Buccaneers to a 45-20 win over the Las Vegas Raiders.

As for meeting the challenge, in his last five games Brady has 15 TD passes and one interception. In a new town, a different uniform, with a whole new set of teammates — and during a coronavirus pandemic that basically stripped teams of organized in-person workouts for months.

“I think it’s knowing the guys better, knowing the system better, everything that we change each week,” said Bucs coach Bruce Arians, who is getting the kind of nonpareil contributions from Brady that Belichick profited from for two decades.

“There’s such good communication of what we’re trying to get done, where the ball should be going versus each coverage. It’s just total growth in the offense.”

While dreams of a run deep into the postseason flow through Bucs Nation, the atmosphere in New England is a tad darker. For now, call it flopping in Foxborough.

The Patriots’ 27-point loss to San Francisco was their largest at home under Belichick, according to Elias Sports Bureau. They had gone 286 games without a three-game losing streak, the longest span between three-game slides in NFL history. New England fell to 2-4 for the first time since Belichick’s first season in 2000, when the Patriots went 5-11.

A week ago, the Patriots didn’t allow a touchdown and still lost to Arizona. This time, they didn’t score a touchdown. The defense isn’t terrible, but it’s hardly a world beater. The offense is inept, and it’s missing the world beater now in Tampa.

Consider that Julian Edelman, a borderline Hall of Fame receiver over his first 10 NFL seasons — he missed one with an injury — is almost forgotten without Brady. Edelman has five receptions total in the last two home defeats.

Dour as ever, Belichick spoke in generalities after the 33-6 defeat to the Niners that dropped New England 2 1/2 games behind the Bills, with a trip to Buffalo next weekend.

“I think we need to do better job in all areas. I don’t think there’s anything you could say that we don’t need work on,” Belichick said. “Obviously we weren’t good on third down on either side of the ball. We weren’t good in the red area. The opportunities that we had we didn’t, weren’t able to capitalize on. We turned the ball over. One takeaway, basically. So we just, just need to be better everywhere.”

It’s possible that will happen. Cam Newton, who has been awful in two games since testing positive for COVID-19, could turn it around. The receivers might begin getting open. The offensive line, ravaged by injuries, might get healthy and coalesce.

But it’s obvious something is missing. Actually, a lot is missing: everything that No. 12, now in Buccaneers pewter, brought to the field, the locker room and the culture in New England.

“If you let Tom Brady stand back there and survey the field, he’s proven for 20 years and he proved it for 21 years, that he is still one of the very, very best.”

That was Raiders coach Jon Gruden on Sunday. Wonder if Belichick was thinking the same thing.