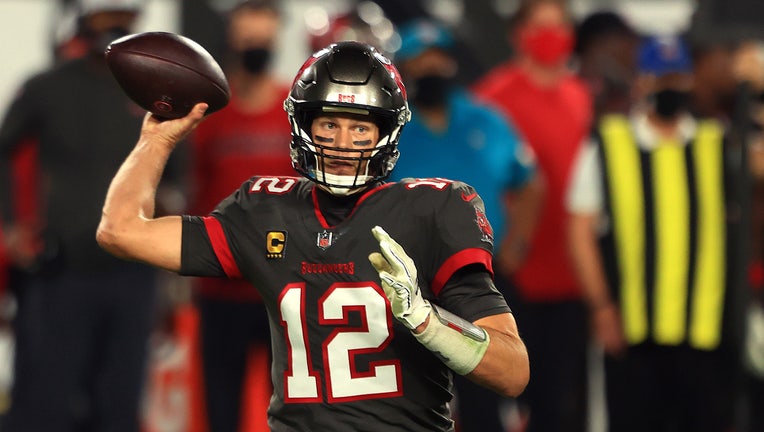 Tom Brady looks to pass against the Los Angeles Rams during the second quarter in the game at Raymond James Stadium on November 23, 2020 in Tampa, Florida. (Photo by Mike Ehrmann/Getty Images)

TAMPA, Fla. - Is there a problem with Tom Brady or is it the offensive scheme he's running? Two of Brady's worst games have come in the last three weeks as the Bucs faced playoff-caliber teams.

Brady's completion percentage is dropping, currently ranked 25th in the NFL. He hit a season low against the Rams completing only 54.2 percent of his passes.

"I think he’s getting confused a few times with coverage that might be causing some inaccurate balls," said coach Bruce Arians. "I don’t see it at all in practice. We’re not missing the deep ball at all in practice –- that’s for sure. It’s just a matter on Sundays of hitting them.”

Arians has built a reputation for a "No risk it, no biscuit" philosophy. But right now those biscuits aren't rising for Tom Brady. After leading the league a month ago for most completed deep passes and yardage, Brady now owns the mark for most incompleted passes over 20-plus yards. Brady was 0-6 on passes of 20-plus yards against the Rams.

“They did a good job preventing them," said Brady. "They kind of play a defense that makes it tough to hit them. They’re not impossible to hit but they’re tight. Guys did a good job running them. We had a couple of shots but in the end [we] didn’t come up with any.”

The struggles haven't only been against the Rams. Brady is now 0-19 on deep passes in his last four games. He's missed on his last 22 deep attempts. That's the longest streak for any quarterback since 2017, according to Nextgenstats.

"We’ve had the guys open –- we’ve just missed them," said Arians. "There are times when coverage dictates you go to that guy. I think we can do a better job of utilizing the deep ball in our game plan [both] more of or less of. Each and every week is so different, but when they’re there, we need to hit them. We can’t have them going off our fingertips and we can’t overthrow them.”

So who is behind the play calls? For the first time, Bruce Arians is indicating that Brady is making some of them.

“We have Tom calling a lot of his own –- we’re picking his own on the sidelines from the game plan," said Arians. "I don’t think it’s a confidence problem whatsoever. It’s not lack of trust, it’s just lack of continuity within the offense of the whole picture.”

Asked what he'd say to the critics that don't feel the Bucs are playing to Brad's strengths, Arians responded: "He can do anything, so it’s not like he can’t do it. I see him do it all the time. He was doing it in September, so it hasn’t changed.”