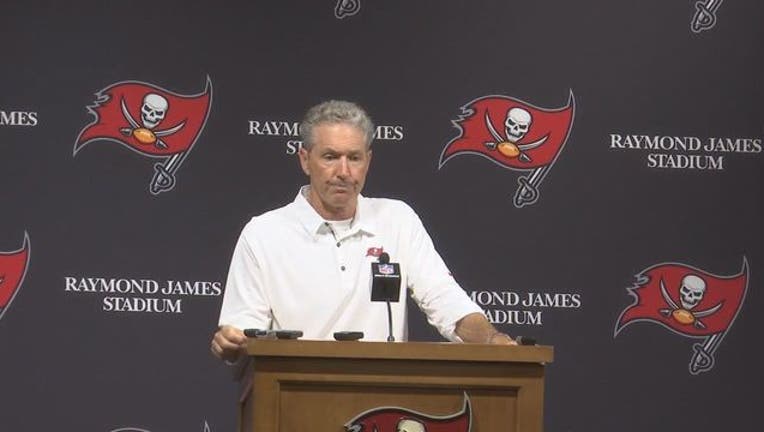 TAMPA (AP) - Tom Brady threw for 303 yards and one touchdown, and New England's porous defense showed signs of improvement Thursday night in a 19-14 victory over the Tampa Bay Buccaneers.

The Super Bowl champions rebounded from a last-second loss to Carolina, despite Brady turning the ball over twice - on his first interception in eight regular-season games and a fumble on one of Tampa Bay's three sacks.

Neither of the mistakes led to points for Tampa Bay (2-2), which was unable to do much offensively until the fourth quarter.

Jameis Winston rallied Tampa Bay late with an 18-yard TD pass to Cameron Brate that trimmed New England's lead to 16-14 with 2:09 remaining. He marched the Bucs from his 25 to the Patriots 19 before throwing an incompletion on the final play.

It might not have come down to a last-second drive if not for another poor performance by Bucs kicker Nick Folk.

Folk missed two field goals and an extra-point before beating the New York Giants on a last-second kick last week. He missed three more field goals Thursday night, including a 31-yarder that would have cut a nine-point deficit to six in the closing minutes.

With his 186th career regular-season win as a starter, Brady tied Brett Favre and Peyton Manning for the most by a quarterback in NFL history. He also has 25 postseason victories, including five Super Bowls.

Defensively, the Patriots entered the night on pace to yield more than yards than any team in league history.

And, Winston and a young Tampa Bay offense that's progressively gotten better since he was selected first overall in the 2015 draft was hoping to be the latest beneficiary of New England's struggles.

Running back Doug Martin provided a lift in his return from a suspension for violating the NFL's policy on performance enhancers with 74 yards rushing and one TD.

But one week after throwing for 332 yards and three touchdowns without an interception and overcoming a pair of fourth-quarter deficits to beat the Giants, Winston was unable to move the ball consistently until the fourth quarter.

The Bucs didn't have a third-down conversion until late in the third quarter, and Martin's 1-yard TD came on a drive the Patriots kept alive with a hands-to-the-face penalty on third down.

Winston finished 26 of 45 with 334 yards and zero interceptions. DeSean Jackson had five receptions for 106 yards.

Brady opened the game with four straight completions before throwing his first interception of the season, overthrowing a wide-open Hogan in the middle of the field to end a streak of 264 pass attempts without an interception.

The Buccaneers honored Malcolm Glazer at halftime, inducting the late owner into the Ring of Honor at Raymond James Stadium.

The late owner joins Hall of Famers Lee Roy Selmon, Warren Sapp and Derrick Brooks, as well as former coach John McKay, Doug Williams, Jimmie Giles, Mike Alstott, John Lynch and Paul Gruber inductees. Former coach Jon Gruden, who led the Bucs to their only Super Bowl title after being acquired in a trade Glazer approved 15 years ago, will be inducted on Dec. 18.

Patriots: Gronkowski was added the injury report after Wednesday's practice, listed as questionable. ... The Patriots did not report any injuries during the game.

Buccaneers: Played with three defensive starters - LBs Lavonte David (ankle) and Kwon Alexander (hamstring), and S Keith Tandy (hip). Tandy's backup T.J. Ward (hip) was inactive, too. ... DB Josh Robinson left the game in the first half with a concussion. ... DE Ryan Russell injured his shoulder in the second quarter and did not return.

Buccaneers: Begin stretch in which they'll play six of eight games on the road, visiting Arizona on Oct. 15.