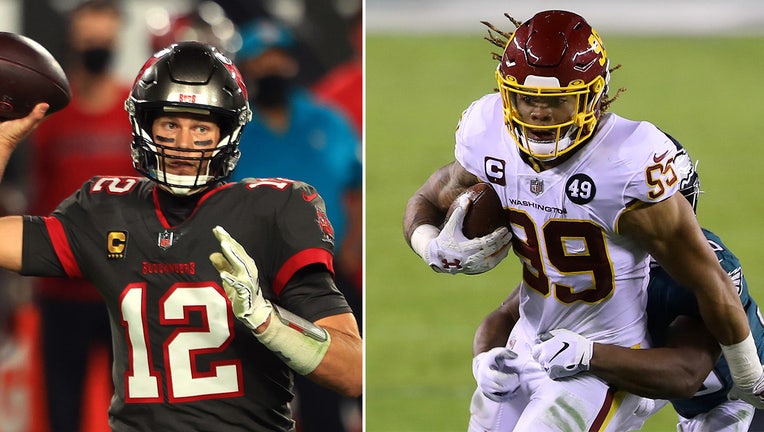 LANDOVER, Md. - Running off the field after Washington clinched a spot in the playoffs, Chase Young couldn’t contain his excitement about who’s up next.

Young and NFC East champion Washington will get Brady and the Tampa Bay Buccaneers on Saturday night in the wild-card round as a home underdog. Young’s first NFL playoff game is Brady’s 42nd and first not in a New England Patriots uniform, a chance for the 43-year-old to add to his career accomplishments.

"Nothing is given — you have to earn everything," Brady said. "We’re going up against a division winner and a team that’s very talented. Certainly on defense they have a lot of playmakers, so we have to put it all together. In order to advance, you have to play good football."

Brady’s postseason resume is well-documented: 30 victories, six Super Bowl championships — double Washington’s franchise history — with 73 touchdowns and 35 interceptions. Young is fired up to take his shot at Brady after leading all rookies with 7 1/2 sacks.

READ: Buccaneers coach Bruce Arians on Chase Young calling out Tom Brady: 'You better watch what you wish for'

Getting to Brady early and often with a front four of Young and fellow first-round picks Montez Sweat, Jonathan Allen and Daron Payne is Washington’s best, if not only, chance to pull the upset. Washington’s defense has feasted against the pass this season, so the Buccaneers are ready.

"We’ve got our hands full with that D-Line, one of the best D-Lines in the league," Brady said. "We’re prepared for a tough challenge, and it should be a fun game."

This will be the first NFL playoff game with a female coach on each sideline. Tampa Bay has two in assistant defensive line coach Lori Locust and assistant strength and conditioning coach Maral Javadifar; Washington has full-year coaching intern Jennifer King, who assists with running backs.

Buccaneers coach Bruce Arians said he and Washington counterpart Ron Rivera, also advocates for more minority representation in coaching, were on a diversity panel once and share similar beliefs. Arians called women in coaching "the wave of the future."

"It’s going to tell those young girls that are watching that you can — yes, you can coach in the NFL," Rivera said. "This game, it’s a tremendous game. It should be open to everybody in terms of opportunities to play, opportunities to coach or opportunities to lead the organization."

Going on the road doesn’t faze the Buccaneers, who matched a franchise best by going 6-2 this season away from Raymond James Stadium, site of this season’s Super Bowl. Arians said his team finally got used to playing in empty stadiums, even though it took a while.

"This year without the crowd noise it’s so different," he said. "Every game is really a home game. "It’s just, ‘Hey, let’s go play ball in the parking lot.’"

Smith missed two games with a strained right calf in the same leg he broke in 2018 and struggled with mobility in the division-clinching win last weekend at Philadelphia. He’s 5-1 as the starter this season and might be able to play even with limited practice snaps, but Rivera broached the possibility this week of rotating Smith and backup Taylor Heinicke.

"We have to look at it," Rivera said. "We’re going to play a very aggressive defense this week. Obviously, it’s something we most certainly have to look at."

Smith is 36 and just the fifth QB to take three different teams to the playoffs, while Heinicke has one regular-season pro start and no playoff experience. Yet Rivera believes their similarities in style allow for Washington’s offense to streamline one game plan no matter who plays.

"I’ve never been a part of a quarterback rotation," Smith said. "I play quarterback. I’m getting ready to go in and get done what I need to get done this week, preparing obviously for a huge challenge, and getting out there and playing."

Tampa Bay has gone from 27th in the NFL in defense two years ago to sixth this season. Washington ranks second after being 27th last season.

Much of the credit goes to two former head coaches-turned defensive coordinators: Todd Bowles for the Bucs and Jack Del Rio for Washington. Bowles is interviewing for the Atlanta Falcons coaching vacancy but said his focus is on this game first.

The Bucs led the league in rushing defense (80.6 yards per game) for the second straight year.

"Scoring points has never really been that hard," Arians said. "I knew when we came here, we were going to build a defense. You win on defense because scoring points isn’t that hard."