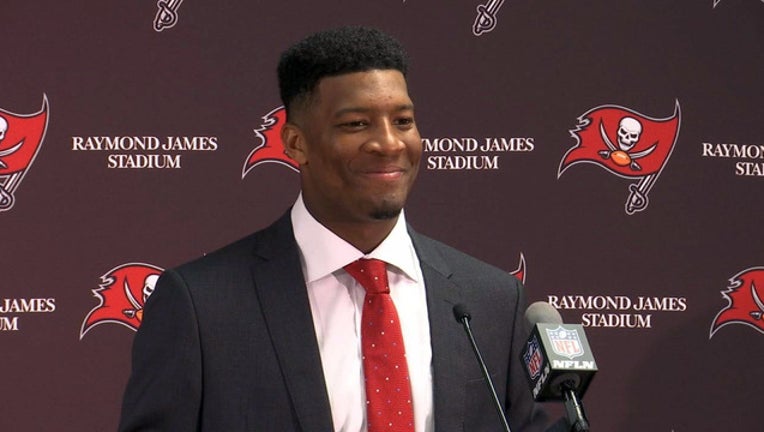 TAMPA (AP) - Their first winning season in six years was nice. Making the playoffs, though, would have been so much sweeter for the improved Tampa Bay Buccaneers.

"We're very close," cornerback Alterraun Verner said after Sunday's 17-16 victory over the Carolina Panthers left the Bucs (9-7) feeling good about their progress yet short of a goal of earning a postseason berth for the first time in nearly a decade.

"You work really hard to get to this point, to even have a shot," five-time Pro Bowl defensive tackle Gerald McCoy added. "We didn't get in, but the season was special."

With Jameis Winston and a revitalized defense leading the way, the Bucs rebounded from a 3-5 start to climb into contention for what would have been their first postseason appearance since 2007.

They entered the final day of the regular season needing to beat the Panthers, who fell on a failed 2-point conversion in the closing seconds, and also get favorable results from six other games.

To no one's surprise, they didn't get the necessary help.

"I was nervous about how we were going to fight (Sunday) just because, when you get to the end of an NFL season and it's pretty obvious you're not going to be in it ... you're fighting some human nature there that these guys are going to be thinking about what's next," coach Dirk Koetter said.

"I'm not the most patient person in the world. I think we have to remind ourselves, this is a tough league where every team has really good players and really good coaches. ... I believe a team is judged on how close they come to achieving up to their talent level," Koetter added. "I'll be honest with you, I think this team did a pretty good job in that area."

Winston threw a 10-yard scoring pass to Mike Evans to snap a fourth-quarter tie and became the first player in NFL history to start his career with consecutive 4,000-yard seasons. The 22-year-old also broke club single-season records for passing yards and touchdowns, while falling 64 yards short of Andrew Luck's league standard of 8,196 for the first two years of a career.

"I wanted to make it to the playoffs," said Winston, who broke Josh Freeman's team records for passing yards and touchdowns in a season, finishing with 4,090 yards and 28 TDs.

"My individual statistics don't mean a lot," Winston added. "Maybe when I get older, maybe I'll look back and laugh at it with my grandkids. Right now ... I just want to continue to get better."

Defending NFC champion Carolina (6-10) wrapped up a disappointing season , one in which six of the Panthers' 10 losses were by three or fewer points.

Cam Newton threw for 237 yards and three interceptions in the finale, but gave his team a chance to pull out a victory by driving 74 yards in 10 plays to pull within 17-16 on a 5-yard TD throw to Kelvin Benjamin.

Instead of kicking the extra point, Panthers coach Ron Rivera opted to go for 2 points. Newton's pass intended for Greg Olsen was batted away by safety Bradley McDougald as the Panthers tight end slipped in the end zone.

Newton played the entire game despite aggravating a shoulder injury. Brent Grimes returned one of Tampa Bay's interceptions 31 yards for a third-quarter TD.

"They asked me if I could go, and I said I could," Newton said, adding the injury did affect his throwing. "As a leader of the team, it's important to show I'm willing to leave it all out on the field. I take pride in putting a good product out there. Today wasn't good enough, but at the end of the day I could say I gave it my all."

HOW ABOUT THAT 'D

Carolina scored on Jonathan Stewart's 2-yard run on its first possession of the game, then didn't get into the end zone again until Newton led the Panthers down field after falling behind 17-10. The 2016 league MVP had a 47-yard completion to Benjamin and converted two fourth downs to get his team into position to try to win it.

The Panthers reached Tampa Bay territory on seven of 13 possessions, but Graham Gano missed three field goal attempts, including a 36-yarder that would have put Carolina up 13-10 with six minutes left.

"We had some opportunities to put some points on the board and we didn't," Rivera said.

The Bucs have been here before. This is their first winning season since 2010, when Tampa Bay went 10-6 but also failed to earn a playoff berth.

"The biggest takeaway from this season is, we've just got to do a better job of executing in the fourth quarter," Panthers linebacker Thomas Davis said. "Essentially what our season has come down to, if we make a few plays here and there in the fourth quarter, we have a much different season."