PALM HARBOR, Fla. - It certainly wasn't a great day for golf, but that didn't stop some of the Tampa Bay Buccaneers' biggest names from teeing it up for the Bruce Arians Family Foundation Celebrity Golf Classic at Innisbrook.

Bucs wide receiver Mike Evans doesn't even play golf, but he wasn't missing this chance to support his coach. Evans flew in from Texas in the middle of a rough storm Sunday night.

"Oh yeah, I had to come," said Evans. "B.A. preaches that...be there for your teammates. Support all of our causes. He always shows up for us. So we show up for him."

This is the seventh year that Bruce and his wife, Chris have hosted the event and it's been their most successful. The dinner and tournament doubled last year's donations, raising $250,000 for his foundation, which develops programs to help abused and neglected children.

"When you put that Super Bowl title on there, it raises a lot more interest," said Arians. "To be able to grow this foundation even bigger, if that helps, let's get another one." 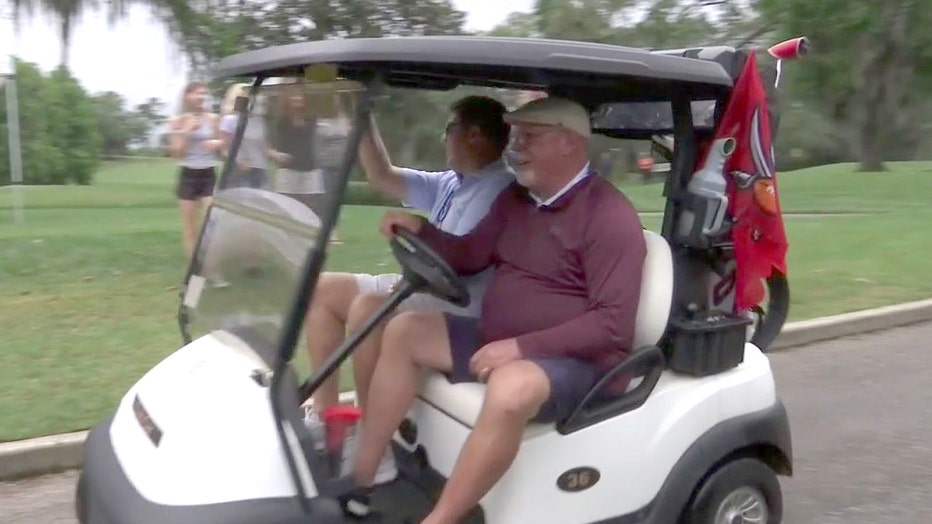 It's been a little over two months since the Bucs hoisted the Lombardi Trophy and this event is the first time the players could mingle with their fans since.

"Like, this all feels so weird," said Godwin. "We haven't been able to do this in a while. To really be able to be closer to people and to have these conversations..see their excitement is awesome."

Monday was supposed to be the first day of the NFL's phase one of OTAs (offseason training activities). Right now, the Bucs are one of 19 teams that won't participate in offseason work at team facilities and Bruce Arians isn't concerned that his team won't be able to work out on the field together.

"It's not time yet," said Arians. "The opting-out thing doesn't bother me at all. We were going to be virtual until the middle of May anyway. So just get it going. Get it back started in your brain...Learn from those so when we do get on the field we're more than ready to go."