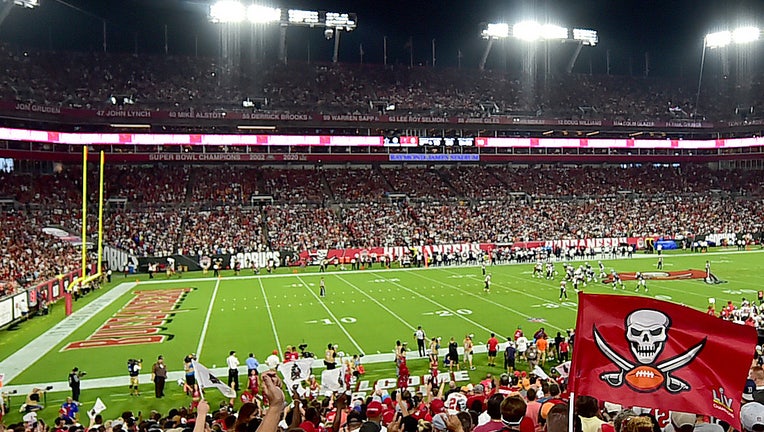 Fans cheer after the Super Bowl banner is unveiled at Raymond James Stadium on September 09, 2021 in Tampa, Florida. (Photo by Julio Aguilar/Getty Images)

TAMPA, Fla. - The Tampa Bay Buccaneers unveiled their newest Super Bowl banner on Thursday night moments before the first game of the season kicked off against the Dallas Cowboys.

Raymond James Stadium was packed with fans as they welcomed the Tom Brady-led squad onto the field. The team revealed the newest championship sign.

Brady and the Buccaneers started their run to another Super Bowl appearance with a dramatic last-second win over the Cowboys. Brady is looking to win consecutive Super Bowls for the first time since he did it during the 2003 and 2004 seasons with the New England Patriots.

The team brought back all of its 22 starters from their Super Bowl LV victory – the only team in history to do that.

The team has vowed to "run it back" and so far they’ve kept up their end of the bargain. Tampa Bay released a hype video before the official start to Week 1 with Brady as the narrator.

"With our crew at our back, our strength is unmatched. So whoever you are, know this. There’s no fight you can bring, there’s no hell you can raise that’s greater than all that we’ve been through together. After all, every great story deserves a sequel. And ours begins right now," he says.