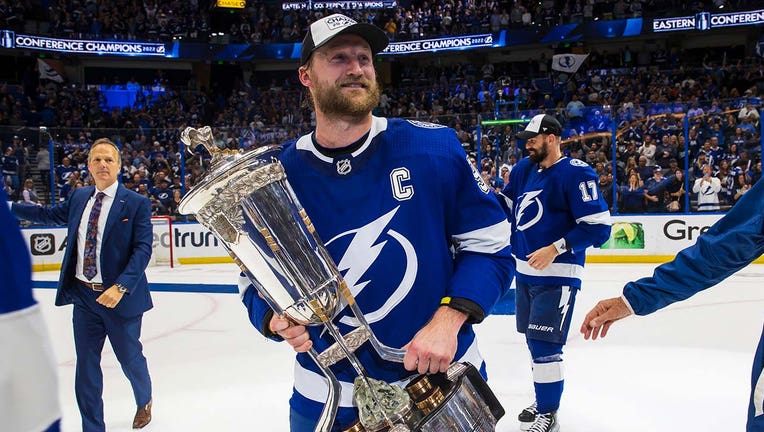 TAMPA, FL - JUNE 11: Steven Stamkos #91 of the Tampa Bay Lightning celebrate the series win with the Prince of Wales trophy against the New York Rangers after Game Six of the Eastern Conference Final of the 2022 Stanley Cup Playoffs at Amalie Arena o

TAMPA, Fla. - Steven Stamkos, at 32 and wrapping up his 14th season, is no longer one of the NHL’s most prolific scorers or even the second- or third-best player on his own team.

The six-time All-Star and two-time "Rocket" Richard Trophy winner as the league’s leading goal scorer is the undisputed leader of the Tampa Bay Lightning, though, and one of the reasons the two-time defending Stanley Cup champions are four wins away from the first three-peat in 40 years.

Game 1 of the Stanley Cup Final is Wednesday night, with the Lightning facing the Colorado Avalanche after defeating the Toronto Maple Leafs, Florida Panthers and New York Rangers to reach hockey’s biggest stage for the fourth time since 2015.

Stamkos has scored a team-leading nine goals in 17 games this postseason, including a pair in Tampa Bay’s 2-1 series-clinching victory over the Rangers in the Eastern Conference final.

"It’s not individuals. It’s great to score a couple goals in a huge game. ... But if I didn’t score and we won I would have been just as happy," the No. 1 overall pick from the 2008 NHL draft said.

"That’s the way the guys are on our team. Each guy plays a part. And (the media) can discuss if it’s a big part or if it’s a little part," the Lightning captain added. "We know in the room that everyone plays a huge part in our group success. That’s why we have been so successful because the guys in that room are truly like that."

Stamkos has carried his share of the load, too, although he missed nearly all of the team’s championship run two years ago because of an injury. There have been plenty of times in the subsequent two seasons that his contributions have been overshadowed by the play of some of the team’s younger stars.

Through it all, Stamkos keeps playing — and producing. He’s the Lightning’s career goals leader with 481 and earlier this season moved ahead of Hall of Famer Martin St. Louis to become the franchise’s career points leader with 972 in 14 seasons.

The Lightning are trying to become the first team to three-peat since the New York Islanders won four straight titles from 1980-83.

"Watching Stammer’s growth — going from the 60-goal scorer and the young guy to the leader, the captain and the guy that people are rallying around — he’s got a lot of weight on the shoulders," coach Jon Cooper said.

Missing all but one game of Tampa Bay’s 2020 championship run was one of the toughest stretches of Stamkos’ career. He appeared in just one game, logging 2:42 of ice time — yet still scored a goal — in Game 3 of the Stanley Cup Final against Dallas.

The captain’s next appearance came after the team’s title-clinching win in Game 6, with Stamkos slipping into his uniform and returning to the ice for the trophy presentation and celebration.

Scoring twice to eliminate the Rangers — with the winner delivered a mere 21 seconds after New York tied the game with a power-play goal scored with Stamkos in the penalty box for holding — thrust him into the spotlight.

Cooper, who has the Lightning in the Cup Final for the fourth time, couldn’t be happier for him.

"Our first Cup run, he misses basically the whole thing. So, at some point you want the light to shine on him. And it has in so many different ways," Cooper said.

"But in an elimination game, to not only score the first goal, but to answer back 21 seconds after they scored, you’re so proud," Cooper added. "He’ll be the first one to push the accolades to everybody else, but he had a hell of a series."

That’s indeed what Stamkos tried to do.

"There was a quiet confidence with this group like there usually is in tight moments like that," the captain said.

"Each guy is just a part of the process. And that’s what makes this team so special and tight and unique," Stamkos added. "We don’t care how it gets done. You just need to get it done."