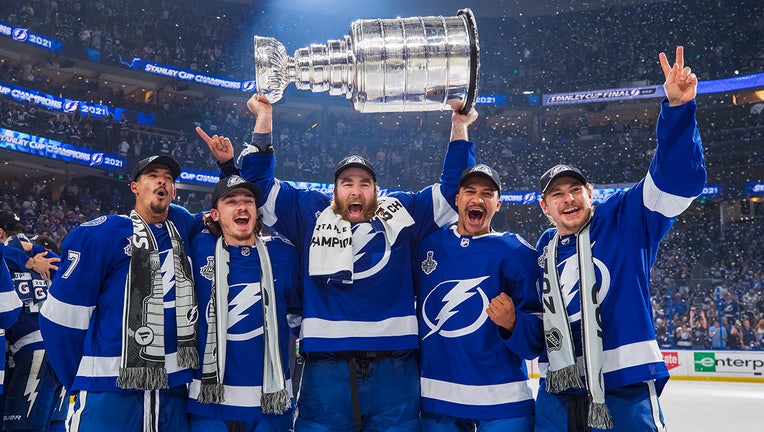 The Hall of Famer has won nine titles as a NHL head coach and five more in front office roles. He’s currently a senior advisor to hockey operations with the Chicago Blackhawks, spends most of his winters in Florida, and is a frequent visitor to Amalie Arena — home of the two-time defending champion Tampa Bay Lightning.

Bowman, nevertheless, knows it’s not a sure thing.

The last team to claim at least three straight Stanley Cup crowns was the New York Islanders, who won four in a row under Al Arbor in the early 1980s.

"It’s easy to say: ‘Yeah, we’d like to win three in a row.’ There’s no question about that," Bowman said. "I think the biggest danger would be to lose your focus during the regular season."

The 88-year-old also won two in a row with the Detroit Red Wings in 1996-97 and 1997-98 and was behind the bench when the 1991-92 Pittsburgh Penguins repeated as champs following the death of Bob Johnson.

"I don’t think you should be thinking about winning three in a row when you’re playing early in the 82-game schedule. You don’t even have to think about that until the playoffs start," Bowman said.

"Number one, every year is different. ... You can’t get too far ahead of yourself," Bowman added. "They’ve got two Cups. Nobody can take them away from them. But they’re not going to win the third Cup in October, November. ... Once you win, there is a magic potion. You know what it is, but that’s not coming until April."

The Lightning entered last season knowing that Stanley Cup title or not, roster changes were on the horizon due to a tight salary cap situation.

Forwards Barclay Goodrow, Blake Coleman and Yanni Gourde, who was selected by Seattle in the expansion draft, are gone. So is defenseman David Savard and backup goalie Curtis McElhinney.

General manager Julien BriseBois feels good about additions the team was able to make, including the acquisition of winger Corey Perry, center Pierre-Edouard Bellemare, defenseman Zach Bogosian and goalie Brian Elliott to back up Vasilevskiy.

"Our identity has always been based on pace, being hard to play against and pushing the pace," BriseBois said. "We try to bring in players who compliment that."

GLAD TO BE HERE

The 36-year-old Perry signed with the Lightning after losing to Tampa Bay in the Stanley Cup Final the past two seasons — first with Dallas and then with Montreal.

Perry won a title with Anaheim early in his career and is excited about the opportunity to help Tampa Bay extend its success.

"Guys called me and said we want to win again. (Those) words coming out of guys mouths so soon after winning their second, that just shows you what kind of group that we have here and what they want to do," Perry said. "I’m glad to be a part of it."

With Goodrow, Coleman and Gourde departing, Tampa Bay’s third line will have a different look after being a big part of the Lightning’s playoff runs the the past two seasons.

Perry, Mathieu Joseph and Ross Colton, who as a rookie scored the winning goal in the team’s Stanley Cup-clinching victory over the Canadiens, are leading candidates to fill the line.

"Having some turnover on a team is not a bad thing. ... But our core’s still intact, and we’re surrounding them with some hungry, hungry players," coach Jon Cooper said.

COMPLACENCY NOT AN OPTION

From BriseBois to Cooper to the players, the Lightning say winning back-to-back titles has only made them want to do whatever’s necessary to keep winning.

"We’re not satisfied," Hedman said. "We don’t want to see anybody else raising that Cup, that’s for sure."