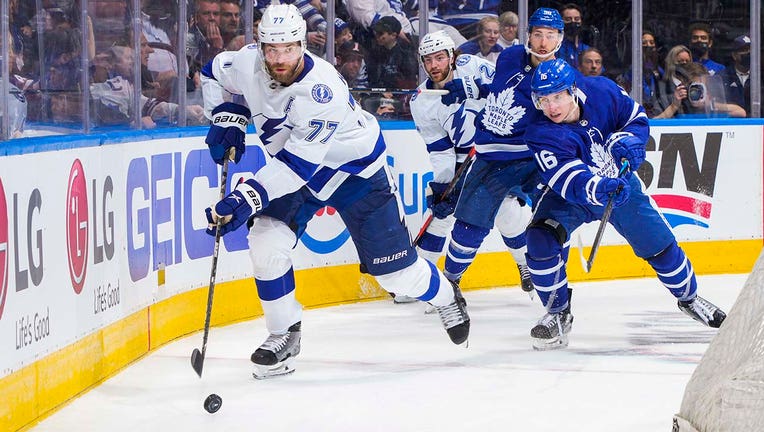 TORONTO, ON - MAY 4: Victor Hedman #77 of the Tampa Bay Lightning plays the puck aginst Mitch Marner #16 of the Toronto Maple Leafs during the third period in Game Two of the First Round of the 2022 Stanley Cup Playoffs at the Scotiabank Arena on May

TAMPA, Fla. - Victor Hedman had a goal and three assists for his first four-point playoff game and the Tampa Bay Lightning beat the Toronto Maple Leafs 5-3 on Wednesday night in Game 2 to even the first-round series.

Mitch Marner had a goal and an assist for Toronto, Michael Bunting and Alexander Kerfoot also scored and Jack Campbell made 29 saves. Auston Matthews had two assists.

Game 3 is Friday night in Florida.

The Lightning opened the scoring on a power play with 1.4 seconds left in the first period. After making a big stop on Point from the slot, Campbell was beaten by Hedman from in tight on a broken play where the puck popped out to the defenseman on the goaltender’s doorstep.

Vasilevskiy made a glove save on Timothy Liljegren early in the second, then Hedman sent Perry in alone on a breakaway less than a minute later to make it 2-0 at 2:21.

Bunting cut it to 2-1 at 7:47. He returned to Toronto's top line alongside Matthews and Marner after missing the last four games of the regular season and the series opener with an undisclosed injury.

Marner got one back for Toronto with 8:07 left and Kerfoot scored the Maple Leafs’ second short-handed goal of the series with 4:17.