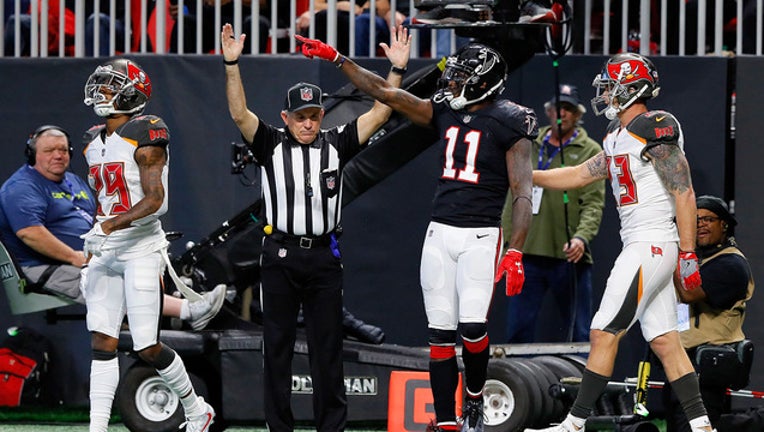 ATLANTA (AP) - Julio Jones is getting hot, and so are the Atlanta Falcons.

Suddenly, things are looking up for the defending NFC champions.

Jones turned in one of the best games of his career, hauling in 12 passes for 253 yards and two touchdowns, and the Falcons won their third in a row Sunday with a 34-20 victory over the Tampa Bay Buccaneers.

"The goal is to get better as you're playing," coach Dan Quinn said. "We're going to keep working like crazy to do that."

It would be hard for Jones to get much better.

After managing only one touchdown catch through the first 10 games, he doubled that total in the first half. Jones hauled in a 51-yard scoring pass from fellow receiver Mohamed Sanu and went 25 yards for a TD on a throw from Matt Ryan, finishing the play with a soaring dive for the pylon, somehow managing to stay in bounds before sticking out the ball with his right hand.

"I'm feeling better," Jones said. "A couple weeks ago, I had an ankle (injury) and it was bothering me. But right now, I'm good."

Jones now has three games in his brilliant career with at least 250 yards receiving. No other player in NFL history has more than one.

"Man, if we could just dial up 250 from him every week, that would be pretty good recipe for success," said Ryan, who was 26 of 35 for 317 yards. "He's an unbelievable talent, an unbelievable competitor. Obviously, he gets us going."

The Falcons (7-4) began the day two games behind New Orleans in the NFC South but holding a wild-card spot.

That's a big improvement over where they were at the beginning of the month, having lost four of five games to raise serious questions about whether they'd even get back to the playoffs, much less duplicate their run to the Super Bowl.

Speaking of the Super Bowl, the Falcons rekindled some ugly memories by nearly squandering a big lead to a team playing its third consecutive game without injured quarterback Jameis Winston.

The Buccaneers (4-7) rebounded from a 27-6 deficit behind Ryan Fitzpatrick and drove deep into Atlanta territory after forcing a fumble at the other end of the field. But Keanu Neal battled down Fitzpatrick's pass on fourth-and-1 at the Atlanta 18 with just over seven minutes remaining, and the Falcons drove for a clinching touchdown on Tevin Coleman's 14-yard run with just under two minutes to go.

"We did a good job of battling back and giving ourselves a chance to win," Tampa Bay coach Dirk Koetter said.

If only they could've figured out some way to stop Jones.

"We tried rolling the coverage to him. We tried pressing him," Koetter said. "We didn't have an answer for him."

Coleman, filling in for again for injured Devonta Freeman, rushed for 97 yards and two TDs. He had a 3-yard scoring run in the third quarter, staking the Falcons to a seemingly comfortable lead in the first of three straight home games for the Falcons.

Fitzpatrick made the Atlanta crowd a bit uncomfortable. Looking for his third straight victory since taking over for Winston, the backup quarterback finished 27 of 44 for 283 yards, setting up a pair of short touchdown runs by Peyton Barber.

Sanu remained perfect in his career when throwing. He is 6 of 6 for 228 yards with three touchdowns.

On the throw to Jones, Sanu took the snap out of shotgun on third-and-1, while Ryan lined up wide right in a receiver slot. The play nearly got derailed when Sanu bobbled the ball faking a handoff to Coleman, but he managed to snag it out of the air and deliver a perfect throw down the middle of the field.

"We're just having fun," Sanu said. "We've got a little swag back."

Jones looks as if he might have a second career as a fencer if this football thing doesn't work out for him.

After his second TD, Jones celebrated by doing some faux jousting with teammate Justin Hardy.

Of course, Jones wound up delivering the winning blow, sending Hardy tumbling backward to the turf.

"We're just trying to be creative," Jones said. "It's one of those things that brings us together."

Atlanta: CB Desmond Trufant went out with a concussion after a helmet-to-helmet collision with teammate Neal in the second quarter. DB Brian Poole also went out with a lower back injury.