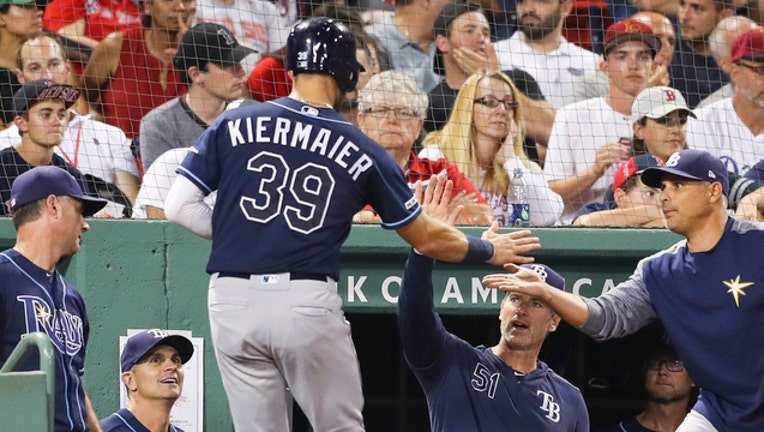 Kevin Kiermaier #39 returns to the dugout after scoring in the seventh inning of a game against the Boston Red Sox at Fenway Park on July 31, 2019 in Boston, Massachusetts. (Photo by Adam Glanzman/Getty Images)

BOSTON (AP) - Kevin Kiermaier homered on the first pitch he saw after coming off the injured list, and Austin Meadows hit a three-run shot on Wednesday night to lead Tampa Bay to an 8-5 victory over the Boston Red Sox and help the Rays keep pace in the AL wild-card race - even before their trade deadline reinforcements arrive.

After closing three deals in the minutes before the 4 p.m. cutoff, the Rays jumped to a 5-0 lead against Boston starter Rick Porcello (9-8). The defending World Series champions made no moves, then went out and lost their third straight game at home.

Willy Adames also homered for Tampa Bay, which won for the fifth time in six games since losing seven of eight to fall behind Boston in the wild-card race. Kiermaier, who missed 10 days with a sprained left thumb, also tripled in a run and scored in the seventh, when the Rays made it 8-2.

Michael Chavis homered and Boston scored three in the bottom half before Colin Poche struck out Andrew Benintendi with runners on first and third to end the inning. Chaz Roe fanned Benintendi looking with two on to earn his first save.

J.D. Martinez had three hits, including his 23rd homer of the season, and Mookie Betts also had three hits. Boston has homered in 16 straight games at Fenway Park, the longest Red Sox streak since they did it in 17 in a row in 1969.

Porcello allowed six runs on nine hits and one walk, striking out seven in 5 2/3 innings before leaving with a 6-2 deficit.

The 2016 AL Cy Young Award winner had been the beneficiary of the best run support in the majors over his last four starts, with the Red Sox scoring 49 runs in his last four outings while he was in the game. He was 4-0 in those starts despite allowing 19 runs in 22 2/3 innings.

Ryan Yarbrough (10-3) came on for opener Andrew Kittredge in the third and went 4 1/3 innings for the win, allowing four runs and six hits with three strikeouts.

"It lets us know that the front office has our backs," Kiermaier said before the game. "And they're giving us the best chance of winning every single day."

The Red Sox made no trades at the deadline. President of baseball operations Dave Dombrowski said he didn't want to give up too much for what was realistically only a chance at a one-game wild-card playoff that is essentially a coin flip.

"It's easy to say to switch people (around)," he said. "Sometimes you need to fix the people you have."

Rays: Placed INF Joey Wendle on the 10-day injured list with right wrist inflammation. Manager Kevin Cash said Wendle felt it on a swing in Toronto and waited a few days before telling the team. "He's a pretty tough guy. For him to acknowledge that two or three days later, just know the way his mind works," Cash said. "Hopefully this is close to a minimum stint. Four, five days of no swinging and get some treatment." . Cash also said OF Tommy Pham hurt his hand on a slide recently and was available off the bench.

Red Sox: C Christian Vázquez took a wild pitch off his right knee in the seventh inning and seemed to be having trouble with it in the ninth. He fell to the dirt and needed to walk it off, then the training staff came out to check on him a few pitches later. He stayed in but limped back to the dugout after the inning.

Rays: LHP Brendan McKay (1-1, 3.72 ERA) was recalled from Triple-A Durham before the game and is slated to start the series finale Thursday.

Red Sox: RHP Andrew Cashner (10-5, 4.18) is set to make his fourth start for Boston since being acquired in a trade from Baltimore. He picked up his first win with the Red Sox last Friday against the Yankees.