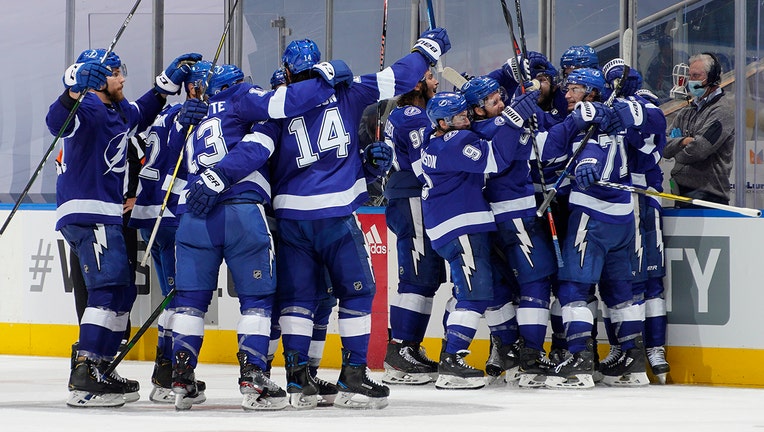 Victor Hedman is mobbed by teammates after he scored the game-winning goal in the second overtime period for a 3-2 win in Game Five of the Eastern Conference Second Round against the Boston Bruins. (Mark Blinch/NHLI via Getty Images)

Victor Hedman scored with 5:50 left in the second overtime to give the Tampa Bay Lightning a 3-2 victory over the Boston Bruins and their fourth berth in the NHL’s Eastern Conference finals in six seasons on Monday night.

Hedman beat goaltender Jaroslav Halak from the left circle, finishing a barrage that saw the Lightning outshoot Bruins 7-1 in the second OT. Tampa Bay improved to 5-0 in overtime games in this year's playoffs.

David Krejci’s goal at 17:27 of the third period wiped out a 2-1 lead that Anthony Cirelli gave the Lightning when he redirected Hedman’s shot past Halak with just under eight minutes remaining in regulation.

Krejci, limited to one point in the first four games of the series, also assisted on David Pastrnak’s power-play goal in the second period for Boston.

Vezina Trophy finalist Andrei Vasilevskiy had 45 saves and Ondrej Palat scored his fifth goal in four games for Tampa Bay, which is back in the East finals after being swept in the first round in 2019.

Halak, who allowed 11 goals over the previous three games, stopped 32 of 35 shots.

The Lightning played without reigning league MVP Nikita Kucherov for most of the night, losing him for the final seven minutes of the opening period after Boston defenseman Zdeno Chara drew a 4-minute double minor penalty for high-sticking the Tampa Bay star.

Kucherov returned at the start of the second, but departed again for the rest of the game after serving a penalty for tripping — a miscue that set the stage for Boston to erase a 1-0 deficit on Pastrnak’s power-play goal at 12:38 of the period.

NOTES: Boston has a power-play goal in every game of the series. ... With Kucherov off the ice, Tampa Bay failed to get off a single shot during its 4-minute power play in the opening period. ... Lightning defenseman Ryan McDonagh returned to the lineup after missing Games 2, 3 and 4 due to injury. ... The Bruins played without injured forwards Sean Kuraly, Chris Wagner and Nick Ritchie.

Tampa Bay awaits the winner of the series between the New York Islanders and Philadelphia Flyers, which the Islanders lead 3-1.