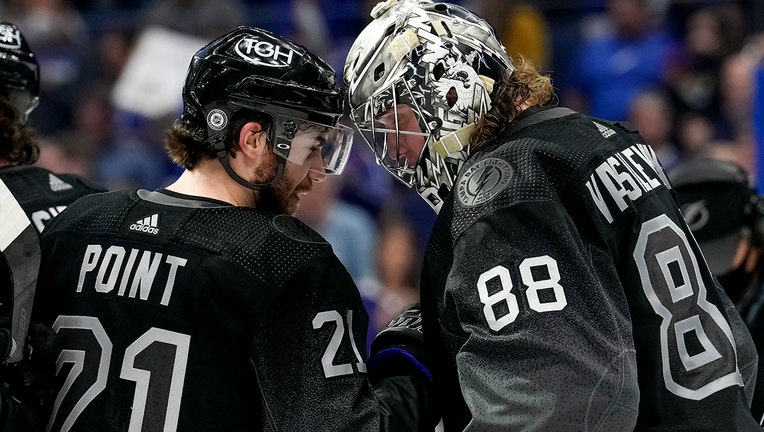 Esa Lindell scored for Dallas, and Anton Khudobin had 26 saves.

Stars coach Rick Bowness was prevented from making significant lineup changes after a 7-1 loss at Florida the previous night due to salary cap issues. He said before the Lightning game if the team had been healthy "a couple guys that have been here" that would have been healthy scratches.

"I was proud of the way we battled back," Bowness said. "That last night (at Florida) was ugly and we're not hiding from that, but we responded. We had a good meeting with the players this morning, and we challenged them and every one of them responded."

Stars forward Jason Robertson was scratched due to a lower-body injury and is day to day. Goalie Braden Holtby, forwards Denis Gurianov and Alexander Radulov, and defenseman Andrej Sekera are in COVID-19 protocols.

"You get these opportunities where we've been short and teams try and advantage of us," Tampa Bay coach Jon Cooper said. "I know they're short some important players for them and you've got to take advantage of that."

Colton put the Lightning up 2-1 off a long pass from Kucherov when he lifted a shot over Khudobin with 9:23 to play.

Kucherov has four assists and seven points during a three-game point streak.

Killorn had an empty-netter with 41 seconds left to seal the win.

"We had a way better game," Stars defenseman John Klingberg said, "We were in that game for a long time."

Vasilevskiy, 12-1-3 against Dallas, had a pair on in-close saves on Radek Faksa and Joel Kiviranta early in the third.

"In the end we defended well, and we didn't take penalties," Cooper said. "That was a big one, too."

Dallas was 0 for 1 on the power play. The Lightning converted 1 of 3 chances.

Lindell opened the scoring from the blue line with 6:12 remaining in the first.

Tampa Bay outshot the Stars 6-0 the rest of the first following Lindell’s goal, and tied it on Point’s power-play goal with 13 seconds left in the period.

Khudobin, recalled from Texas of the AHL on Wednesday and made his first NHL appearance since Nov. 18 in relief Friday, had a nifty pad save on Kucherov’s right circle shot late in the second as Tampa Bay had nine of the 11 shots during the period. The Stars had a 15-minute stretch without a shot.

Dallas center Tyler Seguin has no assists in his last 20 games. ... Tampa Bay defenseman Victor Hedman had an assist and has 40 points (seven goals, 33 assists) in 40 games this season.

Bowness is one of three NHL coaches to have coached in five different decades. Chicago senior advisor Scotty Bowman, who also accomplished the feat, scouted the game. Pat Quinn is the other member of the group.

Stars: Host Montreal on Tuesday night before heading back out on a four-game trip.