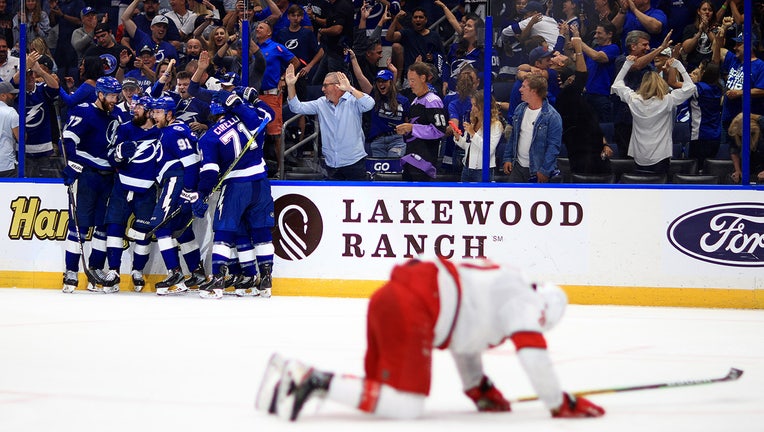 Steven Stamkos celebrates a second-period goal during Game Four of the Second Round of the 2021 Stanley Cup Playoffs against the Carolina Hurricanes at Amalie Arena on June 05, 2021 in Tampa, Florida. (Photo by Mike Ehrmann/Getty Images)

TAMPA, Fla. - The Tampa Bay Lightning have had the edge throughout this series against the Carolina Hurricanes. If not for an overtime loss in Game 3, the Lightning would already be moving on to the semi-finals.

"These are the games that you love to play," said Lightning defenseman Victor Hedman. "Clinching games are always fun. We have a chance of doing that tomorrow."

One big reason the Lightning are in the position to close out this series is due to Tyler Johnson, who scored the tying goal in Game 4. Johnson was waived twice by the Lightning this season, but having Number 9 around during this Stanley Cup run is a huge bonus for the Bolts.

"He's a selfless player that puts the team first, and when called upon, whatever the role is, he does it to the best of his abilities," said Lightning head coach Jon Cooper. "He's proving time and time again that playoff time he is a big contributor for us. It's a big season why we are having some success."

"Johnny is the ultimate team player," agreed Hedman. "He's made that line very complete. With Patty (Maroon) and Ross (Colton). When you're in the playoffs, you're going to have different roles, but he's obviously accepted the role that he has right now. We know Johnny can be called up on, in every situation. He's been a treat to watch and he came up with another clutch goal last game."

In control of this series, the Lightning have complete confidence in however this Game 5 goes -- whether it's another tight defensive battle or an offensive shootout.

"We want to go out there and win every game," said Hedman. "That's the mindset. It doesn't matter how it happens really in the playoffs. We can play either way. That's obviously a big confidence boost for our group."

The Lightning would like to avoid returning home for Game 6, which would be Thursday night. To do that would mean snapping a losing streak in the playoffs. The Lightning have lost the last three Game 5's in the playoffs dating back to last year's Eastern Conference Finals.