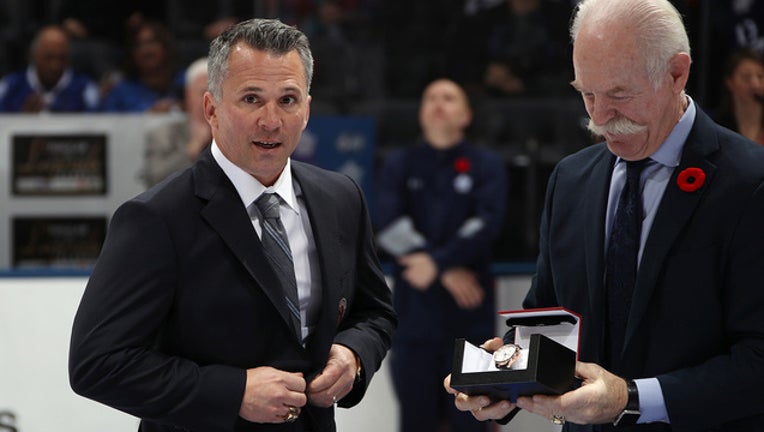 Inductee Martin St. Louis puts on the commemorative jacket prior to the 2018 Hockey Hall of Fame Legends Classic Game at the Scotiabank Place on November 11, 2018 in Toronto, Ontario, Canada. (Photo by Bruce Bennett/Getty Images)

Brodeur, the all-time leader in goalie wins and shutouts, was joined in the player's category by Martin St. Louis, Canadian women's star Jayna Hefford and Russian great Alexander Yakushev. Bettman and O'Ree - the NHL's first black player - went into the Hall as builders.

A three-time Stanley Cup champion and four-time Vezina Trophy winner with the New Jersey Devils, Brodeur won 691 games and had 125 shutouts in his 20 seasons.

"This is a really special day for me," Brodeur said. "I'm honored and humbled."

"He competed with a smile on his face," said Devils teammate and class of 2013 inductee Scott Niedermayer. "He just embraced the big challenge. He wasn't overwhelmed."

O'Ree became the first black player in the NHL when he was called up by the Boston Bruins to play against the Montreal Canadiens on Jan. 18, 1958. The 83-year-old, who had a long career in the minors, played just 45 games in the NHL, but returned to the fold in 1996 as a league ambassador.

"All I wanted to be was a hockey player," O'Ree said. "All I needed was the opportunity."

During Bettman's 25-year tenure, the league has expanded from 24 to 31 teams with annual revenues ballooning tenfold to around $5 billion.

"Everyone knows that my public appearances get an energetic reaction," Bettman joked during his speech. "I get booed when I present the Stanley Cup, particularly to a road team, but even from the home team, and at the draft.

"Tonight should erase any claim that election to the Hockey Hall of Fame is a popularity contest. Rather, I hope that my induction is a testament to what is clearly a collective contribution."

While the NHL has seen incredible growth during Bettman's time at the helm, he's also overseen three lockouts, including one that wiped out the entire 2004-05 season, with another work stoppage looming as early as 2020. Olympic participation and how the league has dealt with concussions have been among some of the other issues where criticism has been directed his way. Like former NHL presidents Clarence Campbell and John Ziegler, Bettman was enshrined while still in the top job.

St. Louis went from undrafted free agent to Hart Trophy winner and two-time scoring champion with the Tampa Bay Lightning, including a Cup victory in 2003-04.

"For all the kids out there listening: follow your dreams," St. Louis said. "Believe in yourself. When it seems like all of the doors are closing, look for a window and find a way in.

"The reason that some people don't reach their full potential is that they quit too soon."

"His desire was infectious," said 2017 inductee Dave Andreychuk, who captained the Lightning to their Cup victory in 2004. "His compete level was like no other."

Hefford won four Olympic gold medals and seven world championships playing for Canada. The sixth woman to enter the Hall, she had 157 goals and 134 assists in 267 games for her country.

Yakushev starred for the USSR in the 1972 Summit Series, scoring seven goals to tie Canada's Phil Esposito and Paul Henderson for the lead in the best-on-best showcase. He won Olympic gold in 1972 and 1976 and was elected to the International Ice Hockey Federation Hall of Fame in 2003.