TAMPA, Fla. - If you've been to the Lightning playoffs games, there is no doubt you have seen Vo Williams up on the big screen.

For the last 10 years, Williams, who is from Sarasota, has been singing, writing and performing music for TV shows, commercials and he even scored the main track for the 2018 Madden NFL Championship.

Williams is home to help put a charge in the Lightning's Stanley Cup bid.

Williams grew up going to Lightning games with his dad at the Thunderdome and now he's bringing the thunder, rocking Amalie Arena to his hit song "Ready, Set."

"I couldn't have imagined this even if they told me it was going to happen," Williams told FOX 13 Sports. "I seriously had not idea. It's literally been one blessing after another. We've just been leveling up every single time. The team here is so welcoming. Man, I'm following their lead and there's nothing like the show they put on here. I'm just happy to be a part of it." 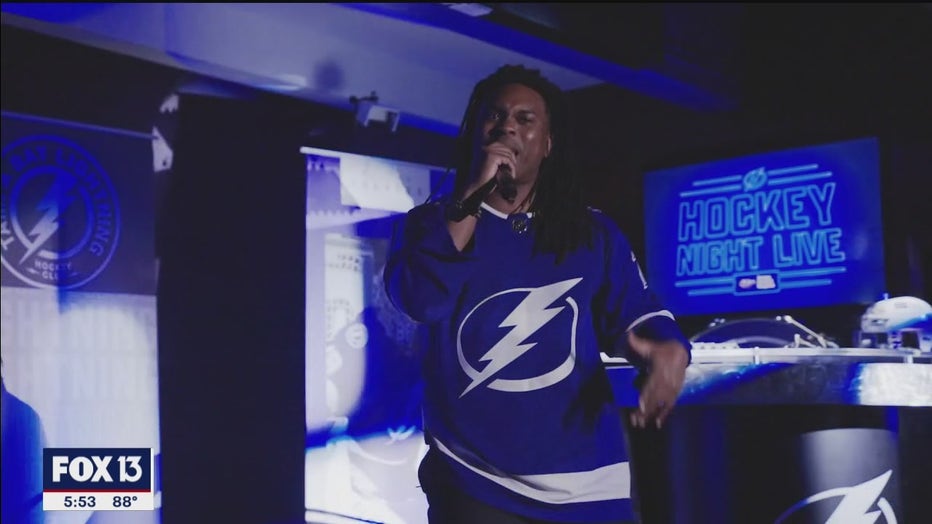 The Lightning discovered Williams on Spotify, where he's playing to a quarter-million listeners a month. He's become an instant hit with the Bolts.

"A lot of my music is made for this moment," said Williams. "There was just so much synergy and harmony what we were doing together already. This is competition, epic space like arena sports that's what my music is made for. We found a home here and it started small and it grew and grew. Tampa Bay Lightning is like a family here as time progressed we had a great foundation."

Williams recorded his early sessions for the regular season and the first round of the playoffs, but he's home now performing live.

"It's way different staring at 18,000 people," said Williams. "On tape, it's just like me and the crew there in the studio there. It's incredible. It feels good number one to be represented up on that screen. The Tampa Bay Lightning are a family from the ice to the lights. It feels good to be there, representing with my face and my performance, really give people my energy. They can see me and feel what I'm saying. Because the feeling is so authentic."

His lyrics are a perfect fit: "Mind over matter, faith over disbelief."

"I live down the street," said Williams. "I grew up down the street. There's nothing like it. It's the best homecoming anyone could possibly receive."

Just like the Lightning and their fans, Vo is "Ready, Set" for another Stanley Cup championship.