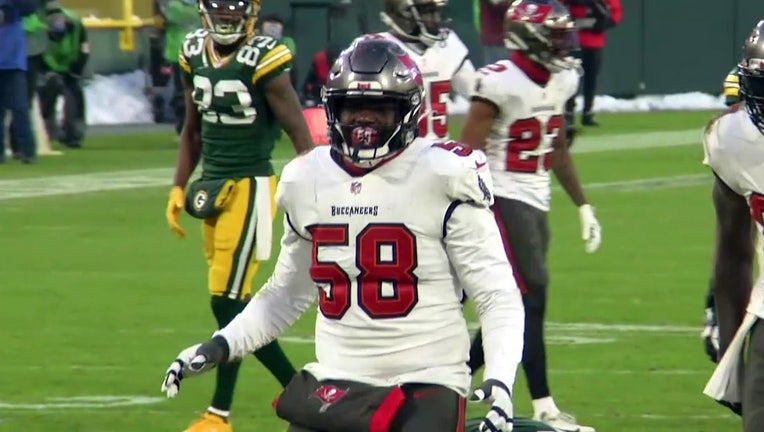 The team’s top priority this offseason is to keep as much of its Super Bowl championship roster together as possible. General manager Jason Licht made significant progress toward that goal even before the NFL’s annual spring spending spree officially began Wednesday. Barrett finalized a four-year, $72 million deal that includes $36 million guaranteed.

Barrett, one of the league’s top pass rushers over the past two seasons, said he never seriously considered the prospect of leaving.

"I was always focused on being back here. There was nowhere else I wanted to be," Barrett said.

"I’m happy we were able to get it done at a fair rate for us and (the Bucs)," the 28-year-old linebacker added. "We had a great team. There’s no reason to not want to try to bring it back and try to do it again."

Licht paved the way for a long-term deal with Barrett, who earned $15.8 million while playing under the franchise tag. First Licht ensured wide receiver Godwin would be back by applying the 2021 franchise tag. Then David return with a new deal as the GM negotiated a contract extension with Tom Brady to free about $19 million under the salary cap.

Tom Brady will be a Buccaneer for a little while longer.

Re-signing tight end Gronkowski to a one-year, $10 million deal was the next piece of the puzzle to fall into place, leaving receiver Antonio Brown, running back Leonard Fournette, defensive lineman Ndamukong Suh and kicker Ryan Succop as key players who can also field offers from other teams.

"We’ve got all the making to do it again. We just have to put the work in again, not rest, and just keep being hungry," said Barrett, who lauded Licht’s effort to keep as much of the roster together as possible.

"I applaud every move he’s been making. From Day 1 since we’ve been here, he’s been doing it the right way," added Barrett, who signed with Tampa Bay as a free agent in 2019 after spending the first five years of his career with the Denver Broncos.

"Usually teams win and let people go because people usually will demand a higher salary than teams are willing to pay. But we made it work. We moved some stuff around, made some amazing deals with other guys who were free. There’s no reason we shouldn’t be able to get it done."

Primarily a backup in Denver, Barrett has flourished as a starter with the Bucs. He led the NFL with 19½ sacks in 2019, then had eight more in 2020 before leading an impressive playoff run with three in the NFC championship game and one in the Super Bowl.

"Shaq has made a profound and immediate impact on our defense from the day he stepped into the building two years ago," Licht said. "From leading the league in sacks in 2019 to leaving his mark during our postseason run ... Shaq’s contributions have been vital to our success as a team, and we look forward to continuing that success in the years ahead."