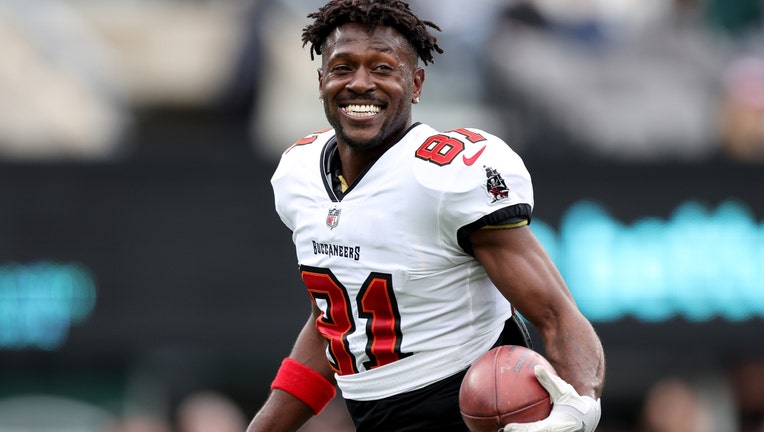 EAST RUTHERFORD, NEW JERSEY - JANUARY 02: Antonio Brown #81 of the Tampa Bay Buccaneers warms up prior to the game against the New York Jets at MetLife Stadium on January 02, 2022 in East Rutherford, New Jersey. (Photo by Elsa/Getty Images)

RUTHERFORD, N.J. - Antonio Brown was kicked off the Tampa Bay Buccaneers after a bizarre, shirtless exit from the field before Tom Brady coolly led the Bucs on a 93-yard drive in the final minutes for a 28-24 victory over the New York Jets on Sunday.

Coach Bruce Arians said after the game that Brown was off the team.

"He is no longer a Buc," Arians said.

Brown’s mid-game meltdown came late in the third quarter with Tampa Bay trailing 24-10. He appeared animated while talking to teammate Mike Evans when he stripped off his pads, jersey, gloves and T-shirt — tossing the gloves and T-shirt into the stands — and then walked bare-chested down the sideline and into the end zone. He then waved to fans as jogged through the end zone and into the tunnel at MetLife Stadium.

Brady connected with Cameron Brate on a 4-yard touchdown shortly after Brown’s exit, and the QB finished the Bucs’ rally with a 33-yard touchdown pass to Cyril Grayson with 15 seconds left.