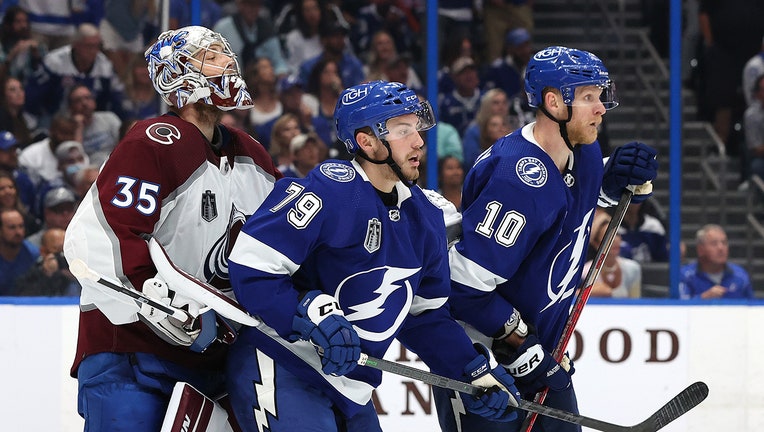 TAMPA, FLORIDA - JUNE 22: Darcy Kuemper #35 of the Colorado Avalanche looks over Ross Colton #79 and Corey Perry #10 of the Tampa Bay Lightning during the third period in Game Four of the 2022 NHL Stanley Cup Final at Amalie Arena on June 22, 2022 in

DENVER, Colo. - The Tampa Bay Lightning are back in a familiar spot.

The Bolts have faced elimination before in these playoffs, falling behind three games to Toronto in the first round. They rallied, winning the final two games to clinch the series. While it's an even steeper climb in the final, coming out of a 3-1 deficit, the mindset is still the same.

They will take the ice in Denver in a must-win Game 5.

Wednesday, the Bolts controlled much of the game, but allowed a tying goal in the third period before the Avalanche grabbed their first lead of the night on the last play of the game in overtime.

The ending of Game 4 was a tough pill to swallow as the Bolts were outgunned in overtime. Adding to the bitterness is what appeared, by some, to be a missed penalty for having too many men on the ice. Colorado had six guys on the ice. Nazem Kadri was the sixth skater, replacing Nathan MacKinnon. However, it was a judgment call that was subject to video review.

Head coach Jon Cooper said it was a tough break.

"What’s great about today is that it’s not yesterday," Cooper said. "Nothing we can do to turn back. They missed it. It’s unfortunate, but it’s water under the bridge now. Let’s go get ready."

"If there’s one thing I know about this group it’s that we respond well to adversity," Tampa Bay defenseman Victor Hedman said. "We’re a resilient group. We believe in what we have."