LUTZ, Fla. - The Steinbrenner High School Warriors softball team embarks on the 2022 season with one goal in mind: "Get to the State Championship," says Head Coach Jason Gordon.

"Coach Brenda did a great job the last eight or nine years she was here," Gordon says. "She’s left a good program going, and my goal is to build on that and get us to the state championship, hopefully."

The team returns with all but three players from last year's run. The Warriors made it all the way to the state tournament, falling to eventual 7A State Champ Lakewood Ranch.

The 2022 team features steady leadership, with 10 players in their senior or junior season.

Two of the senior Warriors, Emily Chiarella and Madi Frey, are two of the Bay Area’s best, and they're also best friends embarking on what both hope will be an unforgettable year. 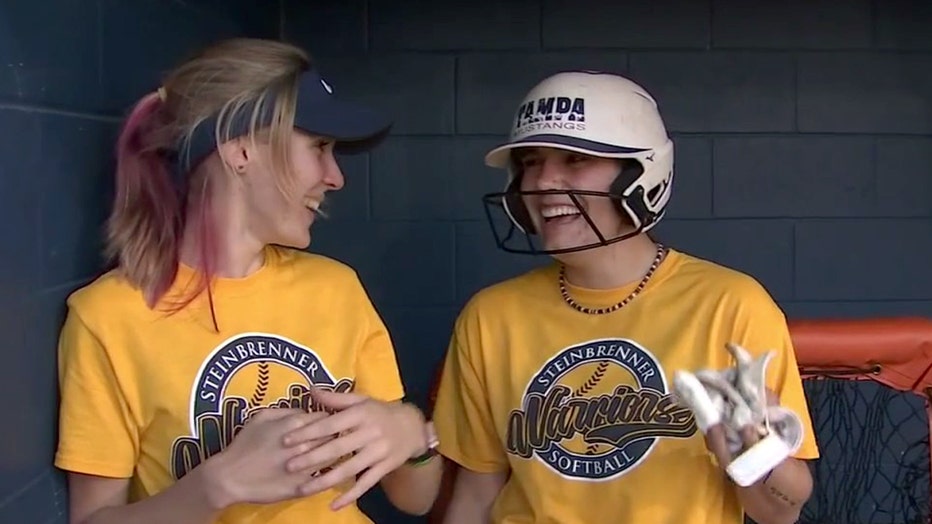 The job of the leadoff hitter in softball is to reach base. Chiarella checks this box frequently.

The job of the second hitter in the lineup is to advance, and when possible, score that leadoff runner. This is where senior Frey comes through with equal frequency.

Together, Emily and Madi are responsible for starting the engine that is the Warriors' softball offensive machine.

Best friends from the sixth grade on, Emily and Madi have been in their respective roles through the years, on multiple teams through middle school and organized travel ball.

Emily used to hit from the right side of the plate, but worked hard to become a left-handed slap hitter, meaning she’s moving her feet toward the pitch as she swings, trying to hit the ball on the ground between the third baseman and the shortstop.

Emily showed her footwork and explained, "You want to have your toes pointed toward the shortstop as you hit."

In fast-pitch softball, the pitcher releases the ball from less than 50 feet from the plate. Emily is moving towards that pitch, decreasing thew amount of time to decide if it’s a ball or a strike. So she studies the pitcher.

"I am very analytical," says Emily, "So I’m reading the pitches. I see the ball out of her hand. I see what she’s going to pitch next. If you guess correctly, and I just happen to guess correctly a lot, you adjust to the pitch and just hit it."

She makes it sound easy and she succeeds more than half of the time.

So with Emily on first base, or second (6 doubles on the year and 10 stolen bases), up to the plate strolls right-handed power hitter Madi Frey.

"She’s usually on second," Madi says of Emily, "Stretching her bases as much as possible. Growing up, my dad always told me, just hit the ball hard and good things will happen. Knowing that she’s on base, my job is to get her in."

Madi Frey did her job with frequent success, as well. She hit .400 on the year with four home runs and 23 RBI.

Now, beginning their final season together, the two friends help maintain the harmony all great teams need to succeed.

"I past years we’ve had little drama, which is common on all High School teams," Madi says. "But, this year, we have a great senior class. All of us work coming together as one team."

Emily Chiarella has committed to play at Florida Gulf Coast University next season. Madi Frye will play at Florida State.  They won’t be teammates for the first time in a long time but they’ll always share the bond of friendship, and the lessons learned on the Steinbrenner softball field.