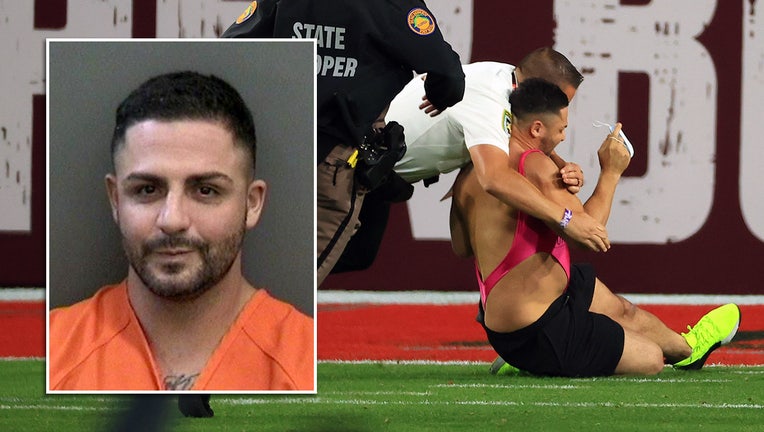 A fan in a pink thong bodysuit scrambled on to the field in the fourth quarter of the Bucs’ eventual win, forcing play at the other end of the field to pause. The intruder put on some moves, juking his way past the first few guards who came out to get him.

"Pull up your pants!" radio announcer Kevin Harlan yelled at the intruder while providing a tongue-in-cheek play-by-play of the dash down the field.

"Someone should sign him," CBS announcer Jim Nantz quipped.

As he neared the goal line and deputies converged, the runner began to slide. That’s when Deputy Clint Stearns ran out from the sideline and pancaked the partly-clothed man.

Stearns, 30, is a seven-year veteran of the Hillsborough County Sheriff’s Office, one of several agencies providing security at the game. But he’s no stranger to the gridiron; he played quarterback at Plant City High School.

Stats posted by MaxPreps show he completed 109 out of 236 attempts for 1,482 yards, tossing eight touchdowns and 18 interceptions. More importantly, he's also credited with two tackles and a fumble recovery -- not including Sunday's takedown, of course.

The intruder on the field, meanwhile, was later identified as Yuri Andrade of Boca Raton. His jumpsuit appeared to have the address for a pornographic website written on it, suggesting the stunt was to generate publicity.

Andrade, 31, was charged with trespassing after being nabbed by Stearns and others. He was released after posting a $500 bond. 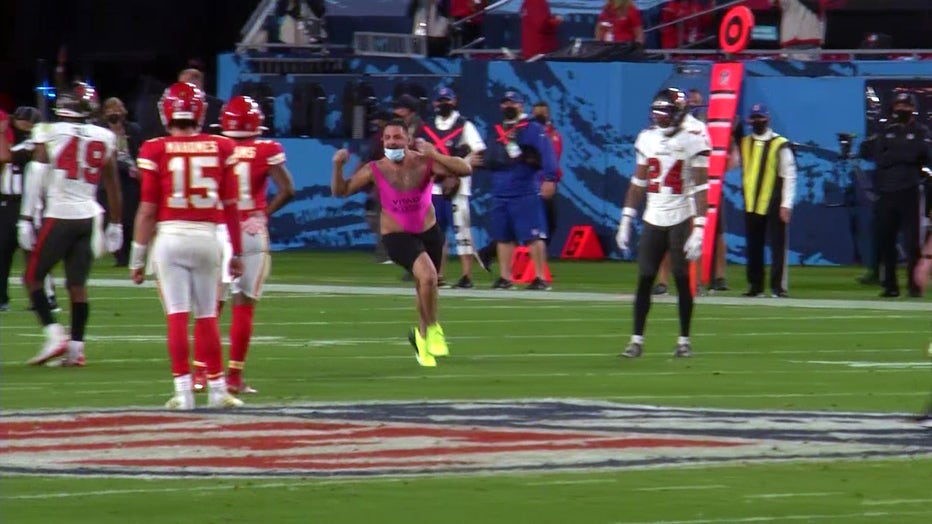 Following the game, Buccaneers safety Antoine Winfield Jr. said the timing of the interruption worked in the Bucs’ favor.

"That was funny, but honestly I needed it because we were getting driven on. When he came out, that gave me a little bit of time to catch my breath," Winfield said. "I’m glad he went out there because that helped me out a lot."