They're Tampa's Giants, homegrown in the 813 – drafted by the New York Giants, (with back to back picks in the 4th and 5th round of this year's NFL Draft) to play in the 201, (the Giants' MetLife Stadium is in New Jersey).

"It's amazing," McFadden told FOX 13 Sports. "It's a really unique opportunity. Obviously, just to get drafted to the same team, but to be able to do this, come back to our hometown and train together."

"Seeing his name called to the same team is super cool," said Belton. "We sent each other some texts right after that happened."

Both have made strong impressions during their offseason work with the Giants and are in strong contention to earn starting jobs as rookies, but the reality of being professionals is still sinking in for the former Jesuit Tiger and former Plant Panther. 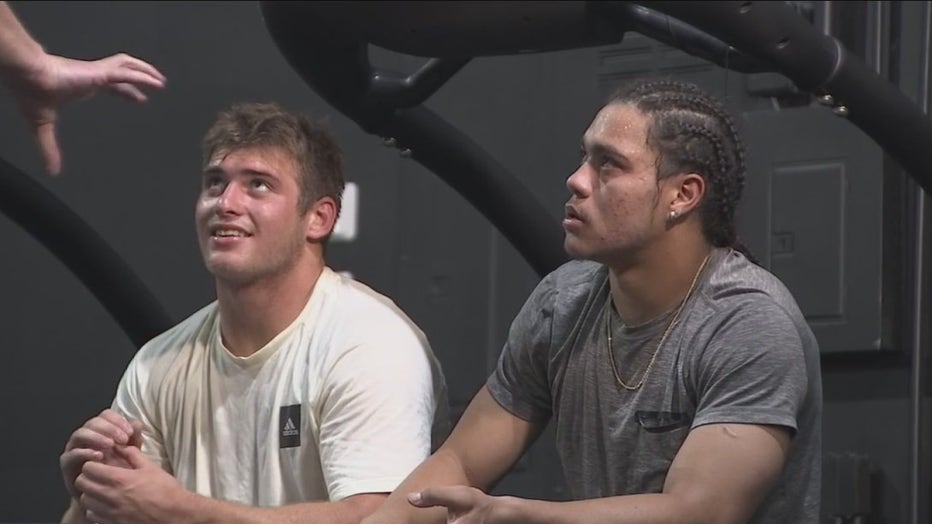 "I felt like it hasn't even hit me yet," said Belton. "It just feels like you're on a new team playing the sport that you love."

"It definitely took a minute," said McFadden. "I'd say I was in shock for the first few weeks for sure before it really settled in. I think once I got up there and got with the team. Started to get into OTAs and practicing I think that's when it hit that I was in the NFL."

McFadden was a late bloomer at Plant and didn't start on varsity until his junior year, but he blossomed as a senior before being named Florida's player of the year. He went on to Indiana and was a 2-year captain, leading the Hoosiers in tackles his last three years.

McFadden brings a tough-nosed work ethic to the Giants.

"I have a lot of personal goals, but I think, first and foremost, I want to help this team win and succeed," McFadden said.

They're two middle-round NFL picks that could be shining stars as rookies in the NFL's biggest city this fall.