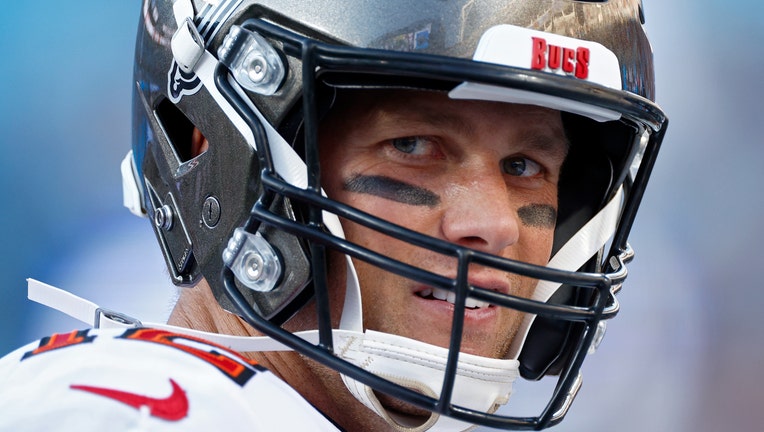 CHARLOTTE, NORTH CAROLINA - DECEMBER 26: Tom Brady #12 of the Tampa Bay Buccaneers on the sidelines during the fourth quarter in the game against the Carolina Panthers at Bank of America Stadium on December 26, 2021 in Charlotte, North Carolina. (Pho

TAMPA, Fla. - Missing Chris Godwin and Mike Evans has taken the bite out of the Bucs passing attack. Since their injuries, Tom Brady has thrown just one touchdown pass in the last two games.

"We’re not really out there trying to throw touchdowns," said Byron Leftwich. "We’re trying to win games and score points. It doesn’t matter to us how we do that. We’re just trying to score points. I never really count touchdown passes, how many throws throughout a game or how many it has been in the past couple of weeks. I really want us to just try to score points, put our team in position and try to help us win football games. That’s really how I see it."

Despite the dip in passing production. Brady still leads the NFL in attempts, completions, yards and touchdowns. Can Brady get back to putting up the numbers without his top two targets?

"I think everyone is going to have to play a role with different people in and out of the lineup," Brady explained. "We’ve had a lot of people in and out the last [few games]. At different times you’ve got to adjust. Different players – Leonard (Fournette), Chris (Godwin), Mike (Evans), A.B. (Antonio Brown) has been out for a while, ‘Gronk’ (Rob Gronkowski) – you’ve just got to try to get guys to play a role and provide the level of production that allows you to go down and score points. Every week is going to be a little bit different."

Brady needs just three touchdowns in the final two games to have back-to-back 40 TD seasons. Something that only Drew Brees has accomplished and that was nine years ago.

"I think just winning the game Sunday will be what I’m looking forward to," shared Brady. "We’ve got to go out there and earn it. All the individual stats and so forth – ultimately, it’s a team sport. That’s just a credit to everybody. I think winning is the thing that I concern myself with the most and I feel like that is the most important thing for any quarterback is to win games."