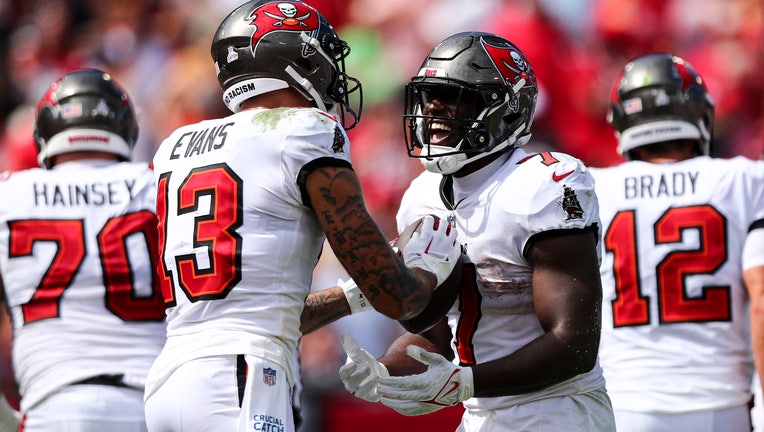 TAMPA, FL - OCTOBER 9: Leonard Fournette #7 of the Tampa Bay Buccaneers celebrates with Mike Evans #13 after scoring a touchdown during the second quarter of the game against the Atlanta Falcons at Raymond James Stadium on October 9, 2022 in Tampa, F

TAMPA, Fla. - Tom Brady threw for 351 yards and a touchdown, helping the Tampa Bay Buccaneers end a two-game losing streak with a 21-15 victory over the Atlanta Falcons on Sunday

Brady completed 35 of 52 passes without an interception, avoiding his first three-game losing streak since 2002, when he was with the New England Patriots. Leonard Fournette scored two TDs for the Bucs (3-2) on a 1-yard run and a 1-yard reception.

The Falcons (2-3) trimmed a 21-0 deficit to six on Marcus Mariota's 19-yard TD throw to Olamide Zaccheaus and subsequent 2-point conversion pass to KhaDarel Hodge with 4:38 remaining in the fourth quarter.

Atlanta did not get the ball back as Brady, aided by a disputed roughing-the-passer penalty against defensive lineman Grady Jarrett on a third-down sack, led a game-clinching drive deep into Falcons territory.

Atlanta has one of the NFL’s most productive running games but did not have much success on the ground early without leading rusher Cordarrelle Patterson, who was placed on injured reserve last week.

A week after rushing for over 200 yards in a three-point victory over Cleveland, the Falcons were outgained 297 yards to 89 overall in the opening half. They remained committed to the run, though, and wound up with 151 yards rushing on 31 attempts.

READ: Boy tackled by security after running on field at Buccaneers game

Mariota was Atlanta's most effective runner, gaining 61 yards on seven attempts. He was 14-of-25 passing for 147 yards and one TD without an interception, but he was also sacked five times for 37 yards in losses.

Succop added a 44-yarder as time expired in the first half to make it 13-0, with Fournette’s 21-yard reception setting up the kick after Atlanta's Younghoe Koo missed a 52-yard field goal with 20 seconds left.

BOY ON THE FIELD

A woman who identified herself as the mother of the child who ran on the field told The Associated Press the boy was 10 years old. A police officer later told the AP the boy is older than 10, but he couldn’t release his information because he’s a juvenile. The officer said the mother has several children and was confused about which one jumped onto the field.

Buccaneers: Play at the Pittsburgh Steelers on Sunday.