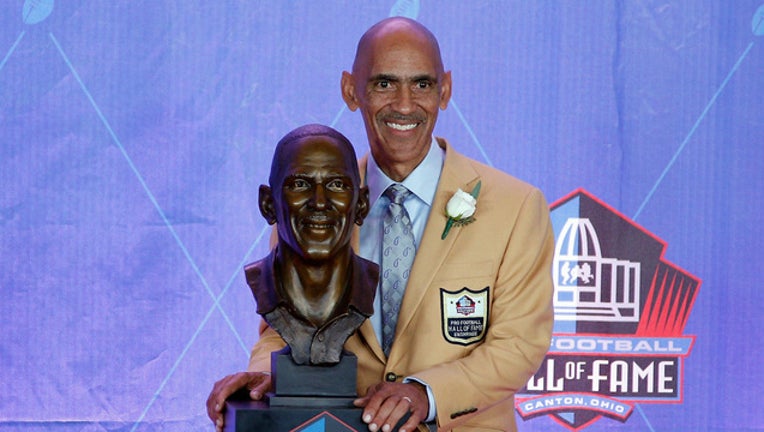 Tony Dungy, former NFL head coach, poses next to his bronze bust during the NFL Hall of Fame Enshrinement Ceremony at the Tom Benson Hall of Fame Stadium on August 6, 2016 in Canton, Ohio. (Photo by Joe Robbins/Getty Images)

A 1-8 record was discouraging, but hardly the only disheartening aspect of yet another slow start for a perennial last-place franchise that suffered through 13 consecutive losing seasons before the young coach's arrival in 1996.

The soft-spoken Dungy, who was inducted into the Pro Football Hall of Fame on Saturday, recalled walking into his office after a third consecutive loss by six or fewer points on the road and learning one player failed to show up for an off-day appearance at an elementary school. Another was 45 minutes late for an autograph session at a car dealership.

The Oakland Raiders were headed to town that week, but there was more pressing business at hand.

"We go into our nine o'clock meeting, supposedly to introduce the game plan on the Raiders. I said: 'Let me just show you something,' and put the two notes on the overhead projector. This is what we're dealing with," Dungy said.

"'You want to know why we aren't winning. This is why we aren't winning.' I said, we can give you game plans, we can do tackling drills, we can do all that, it's not going to change until you guys get this figured out, and I don't know how to do that because I've been doing it for three months," the coach added. "I left, let the players talk about it. We ended up beating the Raiders in overtime."

Dungy's even temperament and insistence on players doing things the "right way" not only helped him survive his only losing season to lead Tampa Bay to four playoff berths in six seasons, but also become the first African-American to win a Super Bowl as a head coach during a stellar seven-year run with the Indianapolis Colts.

And while an impressive coaching resume speaks for itself, the 60-year-old's greatest legacy may be the impact he's had on people's lives through various civic and charitable endeavors.

The disciple of Hall of Famer Chuck Noll had a combined 9-10 postseason record, leading the Bucs to the NFC title game in 1999 and winning it all with the 2006 Colts.

His place in history is not lost on Dungy, the first black elected to the Hall of Fame on the basis of coaching accomplishments. The time he spent as a player and assistant under Noll shaped his philosophy.

"Coach Noll was so tremendous in that regard talking about your life, not just football. That yes, we want to accomplish some things, but you had to get ready for life," Dungy said, "You had to figure out what you were going to be all about as a person."

There were only a handful of black assistants in the NFL when Dungy entered the league as a player in 1977. He spent 15 seasons as part of successful staffs in Pittsburgh, Kansas City and Minnesota before getting to lead his own team.

"I think, first, of the guys who could only coach in the black schools. You can't tell me that Eddie Robinson and John Merritt and Jake Gaither wouldn't have won in the National Football League.

"Then you had guys who were assistants, who were never thought of as coordinators or head coaches. It wasn't in the realm of things," said Dungy, now an analyst for NBC's "Football Night in America".

Despite leading teams to the playoffs in 11 of 13 seasons as a head coach, Dungy endured plenty of criticism.

He was fired by Tampa Bay in 2001, two years after reaching the NFC championship game. Although the Colts made the playoffs in each of his seven seasons, some detractors argue Dungy should have won more Super Bowls with a high-powered offense led by Peyton Manning and receiver Marvin Harrison, who's also part of this year's Hall of Fame class.

Dungy's resume includes an NFL-record 10 consecutive playoff berths with the Bucs and Colts. Still, he believes the contributions he — and many of his players — made off the field matter most.

"In our first meeting, he talked about changing the community, that's how we're going to win," said former Bucs linebacker Derrick Brooks, a first-ballot Hall of Famer enshrined two years ago.

"It wasn't about X's and O's. I was a little appalled, thinking how can you start out and you're not talking about wins when I lost more games last year than I did in my whole (college) career. But it was intriguing.

"I talked to him after that, and he told me: 'Derrick, this is bigger than football," Brooks added. "We're going to change the community, and through that everybody wins."

He sought to do the same in Indianapolis.

"That was what was so enticing to me about the Colts job. When Jim Irsay called me, he said we want to win, obviously, we want to go to Super Bowls, and that's the goal. But we're relatively new in Indianapolis, and we don't have the history of 75 years of football," Dungy said.

"He said: 'We've got to attract the community, got to become a part of it. He mentioned he wanted to do it like the Steelers did."

Though Dungy walked away from coaching after the 2008 season, his influence remains.

"For guys like me, he was a living breathing role model," Tomlin said. "He really provided great clarity in terms of what I wanted to do and how I wanted to do it."

Hall of Fame defensive tackle Warren Sapp calls Dungy the "greatest man I ever met in my life." He and Brooks were drafted in the first round in 1995, the year before Dungy arrived.

"Did I ever think in 1996 when he challenged Sapp and I to be the Joe Greene and Jack Ham of his defense, that the three of us would be teammates 20 years later in the Hall of Fame?" Brooks asked. "Absolutely not. I had no idea. But here we are."