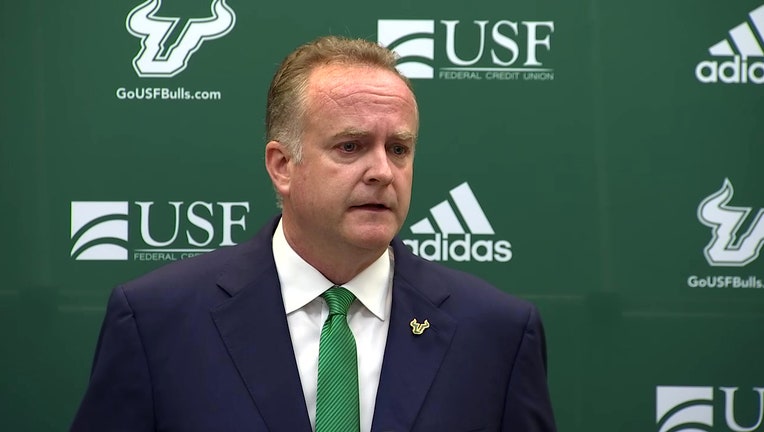 TAMPA, Fla. - University of South Florida athletic director Michael Kelly didn't make an abrupt decision when it came to deciding to let Charlie Strong go. He plans to be just as careful in deciding USF's next hire.

“We will move forward with the necessary urgency that we need to, but a favorite quote of mine from [former UCLA basketball coach] John Wooden was to be quick but don’t hurry,” said Kelly.

Kelly says he didn't expect to make this move, but after ending the season with four straight losses and 14 of their last 18 under Strong, he believes it was necessary.

But was Strong set up to fail? Upon his hiring, Strong was promised there would be facility upgrades to entice top recruits. Did those shortcomings ultimately lead to failures on the field?

"There are so many factors to winning and losing,” said Kelly. "It's a factor, but not the only factor."

“I wasn’t here to be fully aware of promises, but clearly a commitment opened up shortly after [Strong’s] arrival to focus on buildings and operations, and we’re working toward that and will continue to work toward that,” Kelly continued. “We do have some great things here in terms of assets we have, but there’s no doubt we need to continue to add and increase the profile of what we have available to our football team.”

USF is paying Strong a significant buyout, in excess of $5-million to be paid over multiple years. What effect will that have on the new hire? Does the school have enough money to go after a high-profile coach?

"It is something we have to make budget decisions for and raise additional private funding for going forward,” Kelly said. “We’ve made those sacrifices and commitments to be able to live up to our contractual obligations.

“I don’t think [Strong’s buyout] will deter us," Kelly added. "We’re safely planted in the top half of the American Athletic Conference in terms of what we have in our salaries, and we’ll be prepared to go to the marketplace with a competitive salary offer.”

Kelly believes USF is an appealing situation that is drawing a lot of interest.

“We have a passionate and growing fan base that, frankly, needs to unite behind a unified vision to become what we want to be in terms of the standard of excellence that we want. All of us have a role to play in terms of making USF football what we want it to be."