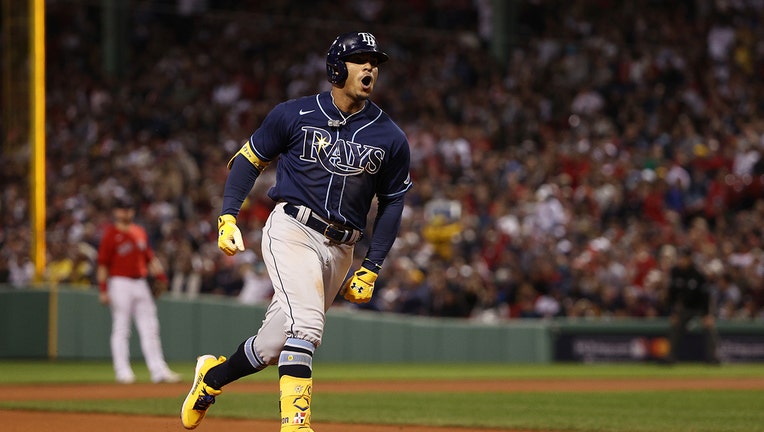 BOSTON, MASSACHUSETTS - OCTOBER 10: Wander Franco #5 of the Tampa Bay Rays celebrates his solo homerun in the eighth inning against the Boston Red Sox during Game 3 of the American League Division Series at Fenway Park on October 10, 2021 in Boston,

ST. PETERSBURG, Fla. - Wander Franco and the Tampa Bay Rays have finalized a $182 million, 11-year contract that includes a club option for the 2033 season.

The shortstop’s deal, which could be worth up to $223 million if the club option is exercised and incentives are reached, was announced Saturday.

"This is a great day for Wander and for the Rays and is evidence of the mutual trust between Wander and our organization," Rays principal owner Stuart Sternberg said in a statement. "We are committed to fielding competitive teams year in and year out, and we all expect that Wander’s presence and contributions will play a large part in maintaining our standard of excellence."

Tampa Bay won the AL East in 2021 but was eliminated by Boston in the ALDS.

The contract is the largest financial commitment to a player in the Rays’ 24-year history. It’s also the biggest deal in major league history for a player with less than a year of major league service time.

Franco is the fifth player with less than a year of big league experience to sign a long-term extension with the team. The others are third baseman Evan Longoria (2008), left-hander Matt Moore (2011), right-hander Chris Archer (2014) and second baseman Brandon Lowe (2019).

"The pace at which Wander has developed speaks to his potential," Rays President of Baseball Operations Erik Neander said in a statement. "We have seen him do special things on the field, particularly for a player that is only 20 years old. He’s an exceptionally driven, budding superstar who can contribute to our success for a long time."

Franco made his major league debut June 22 and hit a three-run homer. He batted .288 with 18 doubles, five triples, seven homers and 39 RBIs in 70 games. He finished third in the American League Rookie of the Year voting.

Franco put together a 43-game on-base streak to tie Cincinnati’s Frank Robinson (1956) for the longest in major league history among players under 21. He went 7 for 19 (.368) with two homers and four RBIs in four postseason games.

Franco’s deal also includes salary escalators if he finishes in the top five in voting for AL MVP. If he is traded before April 2, 2029, Franco receives a $3 million assignment bonus. It drops to $2 million if he is dealt on or after April 2, 2029