HOUSTON - The Washington Nationals made franchise history and earned their first World Series title by defeating the Houston Astros 6-2.

The two teams had a scoreless first inning, but the Astros took a 1-0 lead after Yuli Gurriel hit a homer into the Crawford Boxes in left field. It sent the orange-clad crowd into a frenzy.

Max Scherzer and Zack Greinke both threw scoreless third innings. Five innings in and Greinke showed what an asset he is for the Astros.

Greinke breezed through a 1-2-3 sixth inning. He allowed just one hit, walked one and threw 67 pitches in the efficient outing.

Carlos Correa added an RBI single off Scherzer that made it 2-0 in the fifth.

But the Nationals made a comeback in the top of the seventh with three runs. 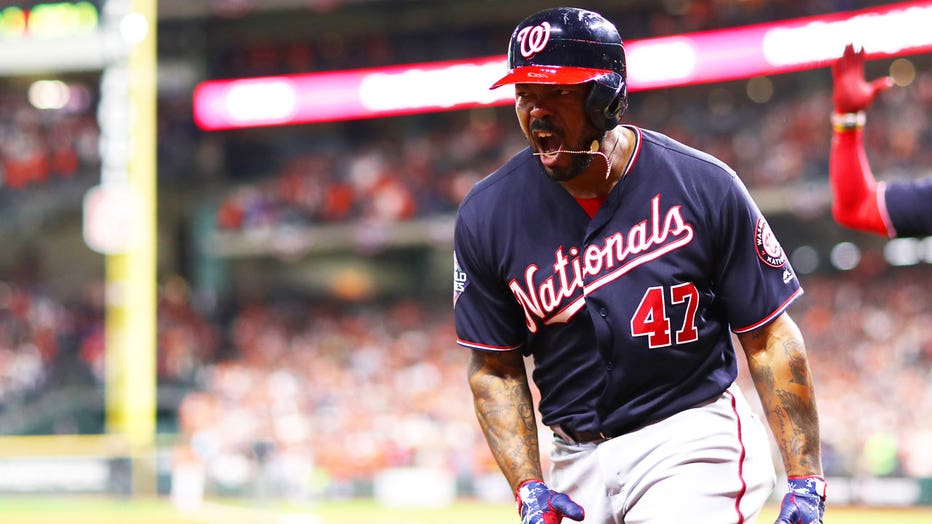 Howie Kendrick celebrates after hitting a two-run drive against Astros' Will Harris in the seventh inning of the final World Series game on Oct. 30, 2019, in Houston. (Photo by Mike Ehrmann/Getty Images)

Kendrick is the first player with multiple go-ahead homers in the seventh inning or later of winner-take-all games in a single postseason. His grand slam in the 10th inning won Game 5 of the NLDS against the Dodgers.

Soto turned 21 on Friday and had two hits in the Series finale and 18 overall in the postseason, with only one player younger than him matching that. Miguel Cabrera had 18 hits as a 20-year-old rookie for the World Series champion Marlins in 2003.

The Nationals weren't done coming into the ninth. Adam Eaton had a two-run single, upping the score to 6.

The Astros tried hard in the ninth to earn their second World Series title in three years but fell short.

Stephen Strasburg, Patrick Corbin and the Nats brought the first World Series championship to the nation's capital since Walter Johnson delivered the crown for the Senators in 1924.