NEW ORLEANS - Hurricane Ida made landfall in Louisiana Sunday as a powerful category 4 storm, making it one of the strongest storms to ever hit the United States.

By Sunday evening it was downgraded to a Category 3. About 590,000 customers were already without power late Sunday afternoon, according to PowerOutage.US, which tracks outages nationwide.

President Joe Biden approved emergency declarations for Louisiana and Mississippi ahead of Ida’s arrival. Hurricane Ida blasted ashore Sunday as one of the most powerful storms ever to hit the United States.

Rising ocean water swamped the barrier island of Grand Isle Sunday as landfall came just to the west at Port Fourchon. Ida made a second landfall about two hours later near Galliano. The hurricane was churning through the far southern Louisiana wetlands, with more than 2 million people living in and around New Orleans and Baton Rouge up next.

Ida’s landfall coincides with the anniversary of Hurricane Katrina, which made landfall in New Orleans on Aug. 29, 2005. Katrina, a Category 3 storm at landfall, left more than 1,800 people dead and left a trail of flooding that devastated the city and other parts of the South.

President Joe Biden pleaded with those still in the path of Ida to listen to local and state officials on just how dangerous this storm is.

"It’s not just the coast, not just New Orleans," Biden stressed. "It’s the northern portion of the state as well."

The storm will almost certainly add to Louisiana’s already beleaguered hospital system. The state had one of the worst outbreaks of COVID-19 has a high percentage of unvaccinated people — which has driven hospitals to capacity.

He said Sunday more than 2,400 COVID-19 patients were in Louisiana hospitals, and that evacuating the largest hospitals was not an option. Roughly 15 hospitals in the state’s largest network, Ochsner Health, were in areas to be potentially affected by Ida.

Within a five-hour span, Ida rapidly intensified. Her winds grew by more than 45 mph as the storm crept through the warm ocean waters of the Gulf of Mexico.

Winds tore at awnings and water spilled out of Lake Ponchartrain in New Orleans before noon Sunday. Officials said Ida's swift intensification from a few thunderstorms to a massive hurricane in just three days left no time to organize a mandatory evacuation of the city's 390,000 residents. Mayor LaToya Cantrell urged residents to leave voluntarily. Those who stayed were warned to prepare for long power outages amid sweltering heat.

Many fled the city prior to Sunday. Those who tried flying out Sunday faced canceled flights with no time left to evacuate.

All arriving and departing flights were canceled at the airport in New Orleans ahead of Hurricane Ida’s landfall. Airport video credits: @kemcents and @PFafala via Storyful

Ida’s 150 mph winds tied it for the fifth-strongest hurricane to ever hit the mainland U.S., the Associated Press reported.

Before the storm came ashore, Biden approved emergency declarations for Louisiana and Mississippi. On Sunday, he spoke about resources already prepared for communities hit by the storm.

He said 2.5 million meals and 3 million liters of water are ready to go. Generators are in place for those who lose power. And he said the feds are in touch with power providers about making sure power gets restored as soon as possible, though he acknowledged that could take weeks for some places.

More than 100 ambulances have been activated and officials are working with the Red Cross to open "dozens and dozens of shelters."

Biden said he’s in touch with the governor of Louisiana as well as Mississippi and Alabama.

"Please, all you folks in Louisiana, Mississippi and, God knows maybe even further east, take precautions," the president stressed. "Take it seriously."

Local and federal leaders hope Ida’s impact won’t be as nearly as bad as Katrina’s. Levee failures pushed Katrina’s death toll to higher than it would have been had they held.

Since then, the federal government spent $14.5 billion on levees, pumps, seawalls, floodgates and drainage that provides enhanced protection from storm surge and flooding in New Orleans and surrounding suburbs south of Lake Pontchartrain. With the exception of three drainage projects, that work is complete.

"This has the potential to be more of a natural disaster whereas the big issue in Katrina was more of a man-made one" because of levee failures, said University of Miami hurricane researcher Brian McNoldy. 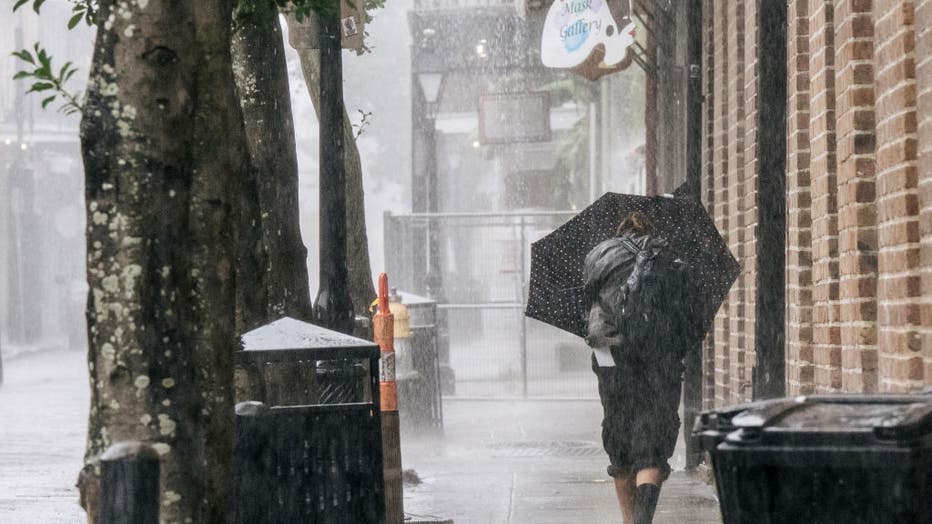 NEW ORLEANS, LOUISIANA - AUGUST 29: A person walks through the French Quarter ahead of Hurricane Ida on August 29, 2021 in New Orleans, Louisiana. Residents of New Orleans continue to prepare as the outer bands of the hurricane begin to cut across th

Even so, maintaining the drains, pipes and canals meant to protect the city from a repeat of Katrina has at times been neglected.

On Friday, officials urged residents to sweep debris out of storm drains.

Experts note that the levee system was built to protect against a 100-year level of storm surge — a surge that has a 1% chance of happening any given year. With rising seas from climate change and the sinking of Louisiana's spongy coast, there’s concern that simply isn’t enough.

Reports issued in 2021 recommend spending a projected $1.7 billion to raise levees and floodwalls to keep providing the 100-year protection through 2078. That includes raising the height of 99 miles (159 kilometers) of levees, replacing more than 1 mile (1.6 kilometers) of floodwall and building 3.2 miles (5.15 kilometers) of new floodwall.

This story was reported from Atlanta. Chris Williams and the Associated Press contributed to this report.