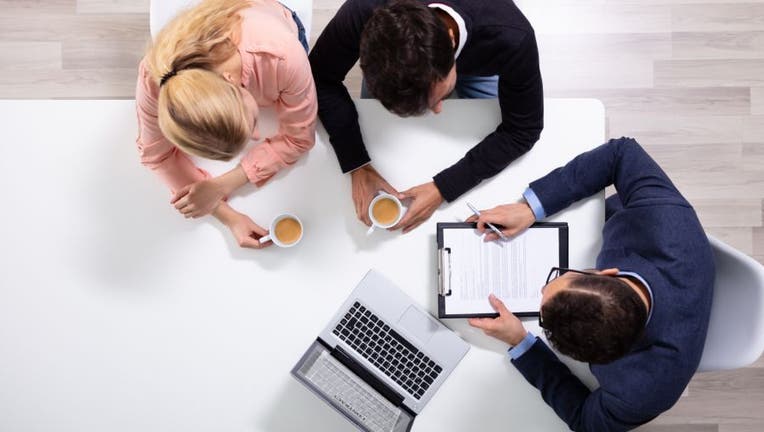 “What’s mine is yours” takes on a new meaning when debt is divvied up in a divorce.

At least 40 percent of marriages end in divorce and, while this statistic is declining, that’s no comfort to the couples who are going through it. Breaking up is hard to do, as Neil Sedaka sang in the 1960s, and when there’s debt involved it’s also complicated.

Splitting up possessions requires give and take, but no one wants custody of the student loan or credit card bill. Yet, assigning and settling debt is part of the divorce process.

What happens to debt after divorce?

The longer you were married, the greater the chance that you may have accumulated debt together, and it’s important to understand what happens to debt after divorce. Much of the onus can depend on whose name is on the loan. If you signed on the dotted line, you’re legally liable as contracts are binding.

The debt could include personal loans you took out on your own or a mortgage you cosigned together. If you're interested in finding better personal loan rates from some of the industry's top lenders, you can get started with Credible's free online tool.

PERSONAL LOANS: EVERYTHING YOU NEED TO KNOW

But splitting debt isn’t always cut and dry, and the division may depend on where you live. Most states follow "common law," under which courts will hold you responsible for any debt that is solely in your name. Then, you and your spouse will be jointly responsible for debt that is in both of your names.

Nine states, however, follow “community law.” If you live in Arizona, California, Idaho, Louisiana, Nevada, New Mexico, Texas, Washington or Wisconsin, debt after divorce is split between spouses even if only one party’s name is on it.

A judge, however, can step in and assign responsibility and ownership to debt after divorce. For example, if a credit card was used for purchases for the family, a judge may order you to pay part of the debt even if the account is only your spouse’s name. Or a judge may assign a joint debt to be paid by a spouse who has a higher income, such as a student loan taken out during the marriage. The division of debt is put in a divorce decree, which is legally binding.

If you're responsible for the student loan amount, you may want to consider refinancing right now — particularly if you have a private student loan, as private lenders typically reduce rates after the Federal Reserve makes rate cuts. Credible can help you compare private lenders within minutes to find the best rates available.

WHO'S RESPONSIBLE FOR STUDENT LOANS AFTER DIVORCE?

How divorce impacts your credit score

If most of your marital debt is from joint accounts, you and your spouse may have similar credit scores. After the divorce, however, your score will reflect your own financial behavior, including your payment history, income, available credit and debt-to-income ratio.

Protect your credit score by removing your name from joint accounts. If your spouse’s financial behavior is irresponsible, it could impact your own credit score since your name will be tied to the account. If you have a joint account that a judge assigns to your spouse for repayment, ask them to refinance the loan in their own name.

One of the leading causes of divorce is having money problems, and one spouse may be more to blame for some of the debt. The best course of action may be to consolidate and pay off as much debt as quickly as possible before entering divorce proceedings. Wiping the slate clean can help you move forward faster, protecting your credit score as well as your emotions.

How to protect your assets during a divorce

Even if a judge assigns one spouse responsibility for a loan, a creditor could come after you if you signed for the debt and your spouse doesn’t pay. The agreement you have with a lender is legally binding, as well, and a credit card issuer may not remove your name even if a divorce decree assigns the debt to your spouse.

To protect your finances, stop using joint credit cards so you don’t add to the balance that will have to be settled. In fact, it can be a good idea to close joint accounts so no new debt can be incurred in your name that you may be on the hook for later. At least try to get your name taken off of joint credit cards, and pay them off, if possible. If your spouse continues to use joint accounts, track spending to help determine who may be responsible for repayment.