BIRMINGHAM, Ala. - Two children are dead, and three other people were injured after a tree crashed into a home during severe weather on Thursday in north-central Alabama, authorities said.

The incident happened in a Birmingham neighbor, and fire rescue crews were at the scene for hours trying to free at least one adult from the debris

FOX 6 WBRC reported the children killed in the tragic incident were a three-month-old and a three-year-old.

Birmingham Fire and Rescue said an 11-year-old and two adults were also inside the home and were injured.

Firefighters did not release the conditions of the injured, who were transported to a nearby hospital.

Jefferson County, Alabama, was under a Severe Thunderstorm Warning when the tree fell. 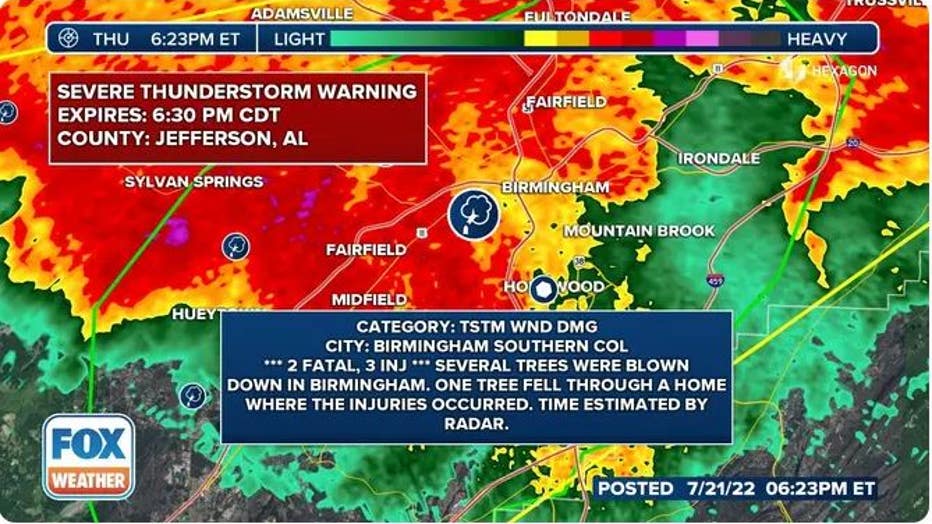 Birmingham Fire and Rescue said two children were killed and three others were injured after a tree fell on a home on Thursday evening. (FOX Weather)

The storms that moved through the region packed a punch with several reports of downed trees and power lines.

WHAT IS A DOWNBURST?

More than 50,000 Alabamians were without power as of Thursday evening.

There were no other reported injuries in the state due to the severe storms.