PHILADELPHIA - A total of 30 Philadelphia police officers were injured Monday night amid citywide unrest that followed a deadly police-involved shooting in West Philadelphia.

The tense scenes unfolded outside the 18th Police District near 55th and Pine Streets through the night Monday.

According to police, 30 officers are in stable condition and have been treated at local hospitals after most were struck with rocks and bricks as they faced off with demonstrators.

A female officer remains in the hospital with a broken leg after police say she was struck by a pickup truck.

So far, 91 people have been arrested for crimes related to civil unrest overnight. Philadelphia Police Commissioner Danielle Outlaw broke down the number of arrests during a press conference Tuesday:

Outlaw added that more charges and arrests were pending, and the department will increase police presence across the city Tuesday night as they prepare for the potential for further unrest and demonstrations.

Mayor Jim Kenney says he remains committed to understanding the anguish of black and brown Philadelphia residents and to accomplishing truly lasting reforms.

In all, nearly 40 arrests were made in connection with looting and vandalism across the city. Police cars and dumpsters were set on fire as police struggled to contain the crowds. Local businesses were among the stores looted and additional police and fire vehicles were among the property vandalized.

More than a dozen officers, many with batons in hand, formed a line as they ran down 52nd Street chasing protesters away from the main thoroughfare. The crowd largely dispersed then.

SKYFOX was over the scene Tuesday morning as looting continued at businesses near the scene.

On Monday afternoon, police say two officers responded to a call for a man with a weapon on the 6100 block of Locust Street around 4 p.m.

The officers were met by a man who police say was carrying a knife, and officers ordered him to drop the knife multiple times. Police say the man, later identified as 27-year-old Walter Wallace Jr., did not comply with those orders and followed the officers around the street with the knife in hand. 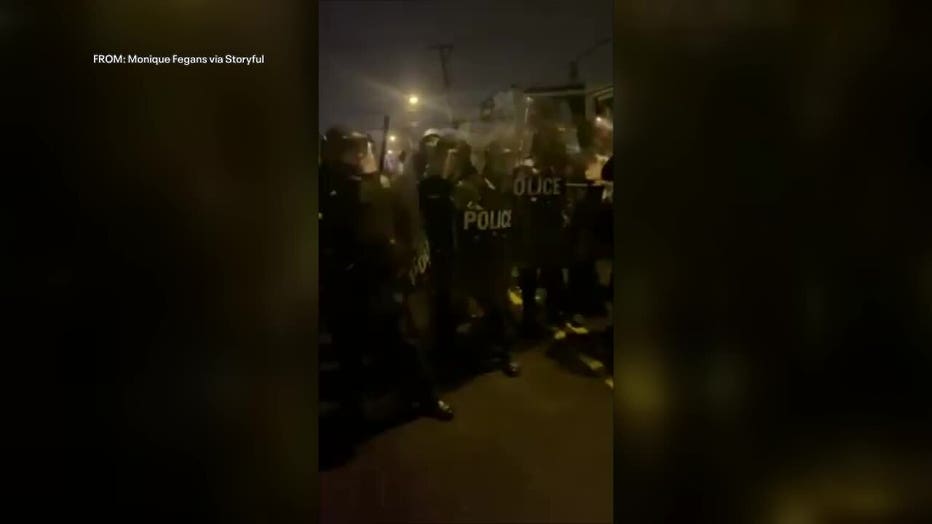 Demonstrators faced off with police near the 18th District following a deadly police-involved shooting earlier in the day.

The two officers then discharged their firearms, firing at least 14 shots, striking Wallace in the shoulder and chest. One of the officers then put him in a police vehicle and drove him to a hospital, where he was pronounced dead a short time later.

Video of the incident shows Wallace's mother following him, trying to get him to drop the knife, before the officers opened fire.

Shortly after the shooting, crowds began to form near the scene, before those crowds moved on to the 18th Police District where they faced off with police.

30 Philadelphia police officers were injured and dozens of arrests were made after a deadly police-involved shooting in West Philadelphia sparked citywide unrest and looting.