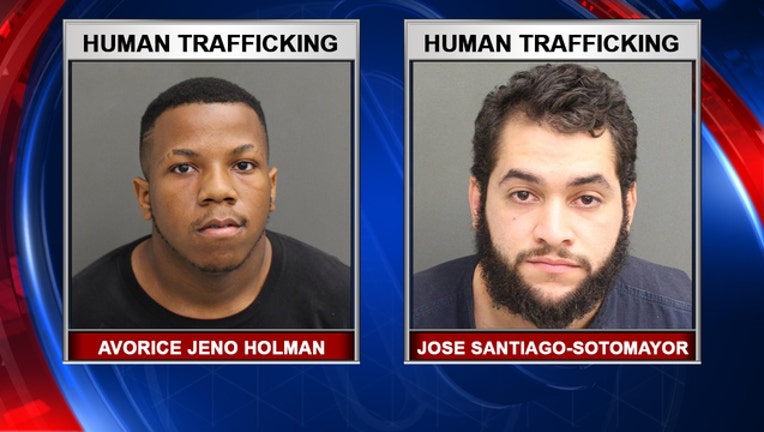 ORLANDO (AP) - Two men are in jail and police are looking for two others in connection with the death of a teenager whose drug overdose led investigators to a human trafficking ring.

On Wednesday, Orlando police announced the arrests of Avorice Jeno Holman, 19, and Jose Ignacia Santiago-Sotomayor, 22. They remain in the Orange County Jail where they're being held without bond.

The 14-year-old girl was brought to an Orlando hospital on Aug. 14, suffering from an overdose of cold medicine dextromethorphan and Xanax. She later died.

"They gave the drugs to the girls in order for them to forget about having sex with the men," said Orlando police Det. Michael Fields. He added, "The girls felt threatened, they were shown guns, firearms and told that bad things would happen to them if they were to tell." The abuse allegedly went on for eight days.

The two men in jail and the two being sought face charges including first-degree murder, human trafficking of a child and procuring a minor for prostitution.

During a news conference, Chief John Mina said they are seeking murder charges because the girl died while the four men were allegedly committing other felonies. "It was foreseeable to everyone involved in an inherently dangerous felony that someone could have died during the commission of these felony crimes," Mina said.

When the girl died, an officer at the hospital started investigating and called detectives.

Police then conducted interviews, looked at records including text messages and surveillance video, and executed search warrants. Fields' affidavit, which ran to 732 pages, was only partially released Wednesday.

The Orlando Sentinel (http://bit.ly/2evcu2i) reports that for about a week in August the 14-year-old girl told her mother she was going to a friend's home whenever she left her house.

The traffickers asked the girls to send nude photos to prove they weren't working with police, Fields said. An affidavit says the men used Backpage.com to find clients and drove the girls to meeting locations.

Police have conducted interviews and pulled text messages and video surveillance since the teen died. They say the other girl who was pulled into the ring is now safe.

"She's doing fine," Fields said. "She is receiving help, and she's getting everything that she needs."